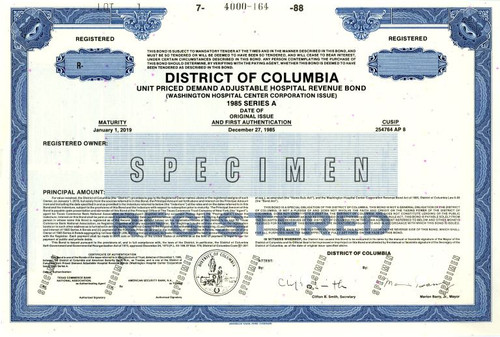 Beautifully engraved Specimen bond certificate from Washington DC dated 1988. This historic document was printed by the American Banknote Company and has an ornate border around it with a description of the bond on top center . This item has the printed signatures of the City's mayor, Marion Barry and Secretary. 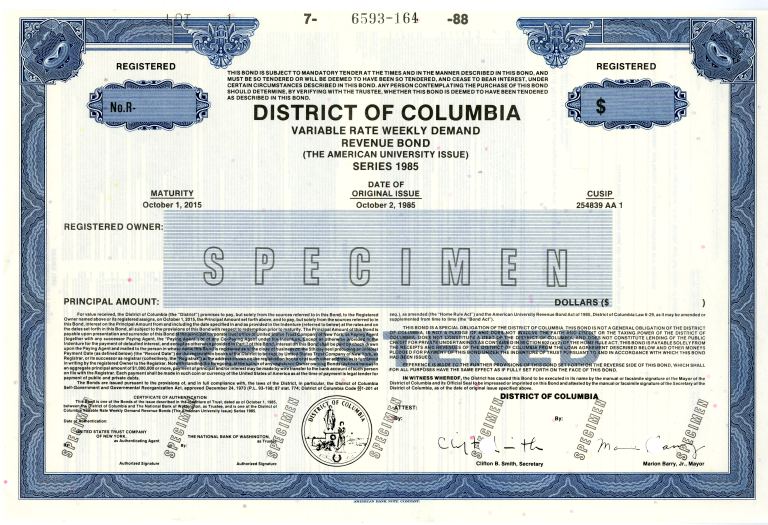 Certificate
Marion Shepilov Barry (born Marion Barry Jr.; March 6, 1936 November 23, 2014) was an American politician who served as the second Mayor of the District of Columbia from 1979 to 1991, and again as the fourth mayor from 1995 to 1999. A Democrat, Barry had served three tenures on the Council of the District of Columbia, representing as an at-large member from 1975 to 1979 and in Ward 8 from 1993 to 1995, and again from 2005 to 2014. In the 1960s he was involved in the Civil Rights Movement, first as a member of the Nashville Student Movement and then serving as the first chairman of the Student Nonviolent Coordinating Committee (SNCC). Barry came to national prominence as mayor of the national capital, the first prominent civil rights activist to become chief executive of a major American city. He gave the presidential nomination speech for Jesse Jackson at the 1984 Democratic National Convention. His celebrity was transformed into international notoriety in January 1990, when he was videotaped smoking crack cocaine and was arrested by Federal Bureau of Investigation (FBI) officials on drug charges. The arrest and subsequent trial precluded Barry seeking re-election, and he served six months in a federal prison. After his release, he was elected to the Council of the District of Columbia in 1992. He was elected again as mayor in 1994, serving from 1995 to 1999. Despite his history of political and legal controversies, Barry was a popular and influential figure in Washington, D.C. The alternative weekly Washington City Paper nicknamed him "Mayor for life", a designation that remained long after Barry left the mayoralty. The Washington Post once stated that "to understand the District of Columbia, one must understand Marion Barry". History from Wikipedia and OldCompany.com (old stock certificate research service)