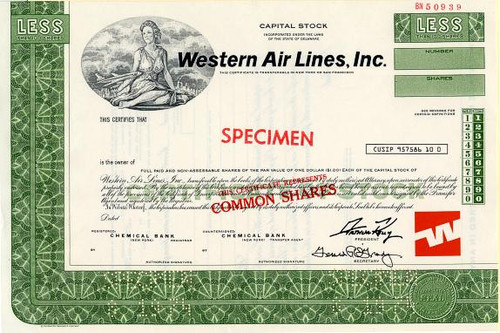 Beautifully engraved Rare Specimen certificate from Western Air Lines, Inc printed in 1974. This historic document was printed by the Federated Banknote Company and has an ornate border around it with a vignettes of a woman and jet, and the company's famous logo. This item has the printed signatures of the Company's President, Arthur F. Kelly and is over 45 years old. 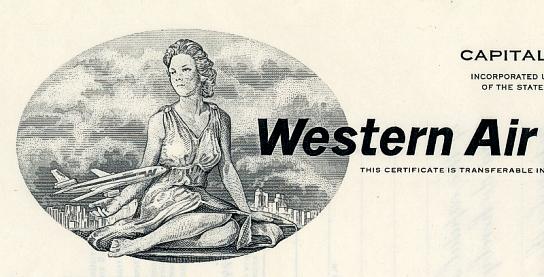 Certificate Vignette
Western Airlines (IATA: WA, ICAO: WAL, and Callsign: Western) was a large airline based in California, with operations throughout the Western United States, and hubs at Los Angeles International Airport and Salt Lake City International Airport. History Western Air Express In 1925, the United States Postal Service began to give airlines contracts to carry air mail all around the country. The company first incorporated in 1925 as Western Air Express by Harris Hanshue. It applied for, and was awarded, the 650-mile long Contract Air Mail Route #4 (CAM-4) from Salt Lake City, Utah to Los Angeles. In April of 1926, Western's first flight took place with a Douglas M-2 airplane. It began offering passenger services a month later. Transcontinental & Western Airlines The company reincorporated in 1928 as Western Air Express Corp. Then, in 1930, purchased Standard Airlines, subsidiary of Aero Corp. of Ca. founded in 1926 by Paul E. Richter, Jack Frye and Walter Hamilton. WAE with Fokker aircraft merged with Transcontinental Air Transport to form TWA. Western Air Transport soon broke off from TWA's structure, and in 1934, changed its name to General Airlines. In 1941 General changed its name back to Western Airlines. After World War II, Western expanded into a large regional airline, introducing service on the Lockheed Constellation, Douglas DC-6, and Lockheed Electra. It merged in 1967 with Pacific Northern Airlines and in the late 60s pushed for an all-jet fleet, adding Boeing 707s, 727s and 737s to its fleet of Boeing 720s. In 1973 it added McDonnell Douglas DC-10s. Western Airlines was headquartered in Los Angeles, California. Its major hubs were at LAX and Salt Lake City, Utah and smaller hubs in Las Vegas, Nevada and Denver, Colorado. On October 31, 1979, Western Airlines Flight 2605 crashed while landing at Benito Juarez International Airport in Mexico City. The crew of the DC-10 had landed on the wrong runway and impacted with construction vehicles. At its peak in the 1970s and 1980s, Western Airlines flew to many cities across the American Southwest and to various spots in Mexico, Alaska, Hawaii and Canada, while keeping a large intra-state route structure in its home state of California. It began flights from Anchorage and Denver to London Gatwick Airport in 1981. As it extended its eastern network to such airports as Washington-Dulles and Boston-Logan, it became a prominent sponsor of the Bob Barker television show The Price is Right, to try to make customers from the East more aware of its presence. In the early 1980s, Air Florida tried to buy Western Airlines, but it was able to purchase only 16 percent of the airline's stock. Finally, on September 9, 1986 Western Airlines was bought by Delta Air Lines, and it merged fully into that airline on April 1, 1987. After the merge, Delta eventually released the name Western Airlines. Western can also be noted for contributing to popular culture with its 1960s advertising slogan, "It's the oooooonly way to fly!" Spoken by the Wally Bird, an animated bird hitching a ride aboard the fuselage of a Western airliner, and voiced by veteran actor Jim Backus, the phrase soon found its way into animated cartoons by Warner Bros. and Hanna-Barbera. Another famous advertising campaign by the airline centered on Star Trek icons William Shatner and Leonard Nimoy. During the 1970's, they promoted themselves as "the champagne airline" because champagne was offered free of charge to every adult passenger over 21 years old. History from Wikipeida and OldCompanyResearch.com. About Specimen Certificates Specimen Certificates are actual certificates that have never been issued. They were usually kept by the printers in their permanent archives as their only example of a particular certificate. Sometimes you will see a hand stamp on the certificate that says "Do not remove from file". Specimens were also used to show prospective clients different types of certificate designs that were available. Specimen certificates are usually much scarcer than issued certificates. In fact, many times they are the only way to get a certificate for a particular company because the issued certificates were redeemed and destroyed. In a few instances, Specimen certificates were made for a company but were never used because a different design was chosen by the company. These certificates are normally stamped "Specimen" or they have small holes spelling the word specimen. Most of the time they don't have a serial number, or they have a serial number of 00000. This is an exciting sector of the hobby that has grown in popularity over the past several years.