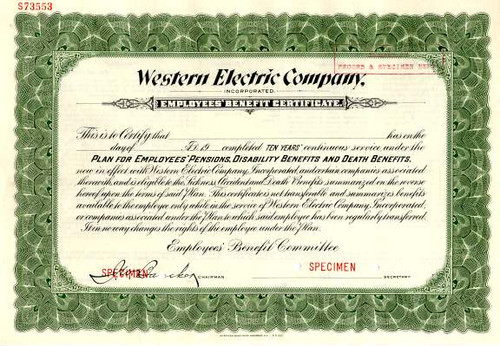 Beautifully engraved SPECIMEN Employees' Benefit Certificate from the Western Electric Company, Inc. This historic document was printed by the American Bank Note Company in the 1920's and has an ornate border around it with the company's name on top. This item has the printed signature of the Company's Chairman and is over 80 years old. This is the ftrst time we have had these certificate for sale and only have one of each color. The back of the certificate summarized the benefits under the plan, which includes such items as payments of $20 to $30/week depending on years of service with a lifetime maximum of $5,000, a burial expense of $150, etc. The Western Electric Company was formed in 1869 as a company in Cleveland, Ohio. Started out making telegraph equipment and misc. telephone equipment. In 1877 they moved to Chicago, Ill. And became Western Electric Company (official name). They supplied Western Union with their phone equipment from 1878 1879. In 1881 they were bought out by The Bell Company. They became the sole suppliers of the Bell System. They eventually sold to their own employees who formed the company Graybar Electric Company that is still in business. In the early 1900s, AT&T engaged in businesses that ranged well beyond the national telephone system. Through its International Western Electric Company, its international manufacturing subsidiary, AT&T and affiliated companies around the world manufactured equipment to meet the needs of the world's telephone companies. These firms also sold equipment imported from the United States. By 1914, International Western Electric Company locations included Antwerp, London, Berlin, Milan, Paris, Vienna, St. Petersburg, Budapest, Tokyo, Montreal, Buenos Aires, and Sydney. In 1925, Walter Gifford, the newly elevated to the presidency of AT&T, decided that AT&T and the Bell System should concentrate on its stated goal of universal telephone service in the United States. He sold the International Western Electric Company to the newly formed International Telephone and Telegraph Company (ITT) for $33 million in 1925 About Specimens Specimen Certificates are actual certificates that have never been issued. They were usually kept by the printers in their permanent archives as their only example of a particular certificate. Sometimes you will see a hand stamp on the certificate that says "Do not remove from file". Specimens were also used to show prospective clients different types of certificate designs that were available. Specimen certificates are usually much scarcer than issued certificates. In fact, many times they are the only way to get a certificate for a particular company because the issued certificates were redeemed and destroyed. In a few instances, Specimen certificates were made for a company but were never used because a different design was chosen by the company. These certificates are normally stamped "Specimen" or they have small holes spelling the word specimen. Most of the time they don't have a serial number, or they have a serial number of 00000. This is an exciting sector of the hobby that has grown in popularity over the past several years.