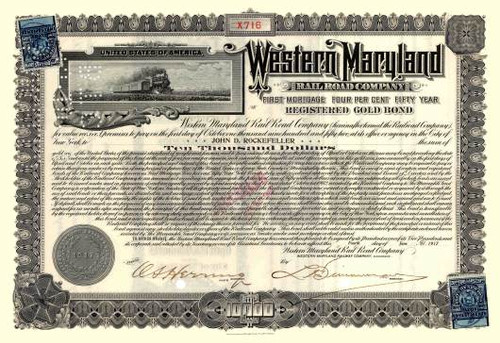 Beautifully engraved certificate from the Western Maryland Railroad Company issued in 1917 to John D. Rockefeller but not signed by him. This historic document was printed by the International Banknote Company and has an ornate border around it with a vignette of a train. This item is hand signed by the Company's Vice President and Assistant Secretary and is over 103 years old. Punch cancelled.

John D. Rockefeller name on certificate
John. D. Rockefeller John Davison Rockefeller (July 8, 1839 - May 23, 1937) was the guiding force behind the creation and development of the Standard Oil Company, which grew to dominate the oil industry and became one of the first big trusts in the United States, thus engendering much controversy and opposition regarding its business practices and form of organization. Rockefeller also was one of the first major philanthropists in the U.S., establishing several important foundations and donating a total of $540 million to charitable purposes. Rockefeller was born on farm at Richford, in Tioga County, New York, on July 8, 1839, the second of the six children of William A. and Eliza (Davison) Rockefeller. The family lived in modest circumstances. When he was a boy, the family moved to Moravia and later to Owego, New York, before going west to Ohio in 1853. The Rockefellers bought a house in Strongsville, near Cleveland, and John entered Central High School in Cleveland. While he was a student he rented a room in the city and joined the Erie Street Baptist Church, which later became the Euclid Avenue Baptist Church. Active in its affairs, he became a trustee of the church at the age of 21. He left high school in 1855 to take a business course at Folsom Mercantile College. He completed the six-month course in three months and, after looking for a job for six weeks, was employed as assistant bookkeeper by Hewitt & Tuttle, a small firm of commission merchants and produce shippers. Rockefeller was not paid until after he had worked there three months, when Hewitt gave him $50 ($3.57 a week) and told him that his salary was being increased to $25 a month. A few months later he became the cashier and bookkeeper. In 1859, with $1,000 he had saved and another $1,000 borrowed from his father, Rockefeller formed a partnership in the commission business with another young man, Maurice B. Clark. In that same year the first oil well was drilled at Titusville in western Pennsylvania, giving rise to the petroleum industry. Cleveland soon became a major refining center of the booming new industry, and in 1863 Rockefeller and Clark entered the oil business as refiners. Together with a new partner, Samuel Andrews, who had some refining experience, they built and operated an oil refinery under the company name of Andrews, Clark & Co. The firm also continued in the commission business but in 1865 the partners, now five in number, disagreed about the management of their business affairs and decided to sell the refinery to whoever amongst them bid the highest. Rockefeller bought it for $72,500, sold out his other interests and, with Andrews, formed Rockefeller & Andrews.