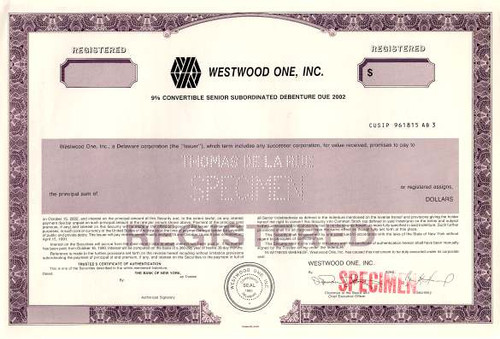 Beautifully engraved SPECIMEN 9% Convertible Debenture certificate from Westwood One, Inc. This historic document was printed by Thomas de la Rue and has an ornate border around it with a vignette of the company logo. This item has the printed signatures of the Company's Officers ( Norman Pattiz as Chairman ). 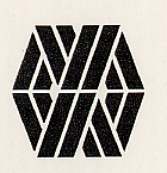 Certificate Vignette
Westwood One (NYSE: WON) provides over 150 news, sports, music, talk, entertainment programs, features, live events and 24/7 Formats. Through its subsidiaries, Metro Networks/Shadow Broadcast Services, Westwood One provides local content to the radio and TV industries including news, sports, weather, traffic, video news services and other information. SmartRoute Systems manages traffic information centers for state and local departments of transportation, and markets traffic and travel content to wireless, Internet, in-vehicle navigation systems and voice portal customers. Westwood One serves more than 7,700 radio stations. Westwood One is managed by Infinity Broadcasting Corporation. Westwood One supplies radio and television stations with information services and programming. Westwood One is the largest domestic outsource provider of traffic reporting services and the nation's largest radio network, producing and distributing national news, sports, talk, music and special event programs, in addition to local news, sports, weather, video news and other information programming. Westwood One's principal source of revenue is selling commercial airtime to advertisers through one of its two operating divisions: Metro/Shadow, which is comprised of Metro Networks and Shadow Broadcast Services and the Westwood One Network Division. Westwood One provides a broad range of programming and information services, which deliver audience to advertisers and also deliver traffic, news, talk, sports and entertainment programs to its affiliate stations. In 1996, Westwood One acquired Shadow Traffic and in 1999, Westwood One significantly expanded its local and regional reach through its merger with the country's largest traffic service provider, Metro Networks, which broadcasts information reports in 67 of the 75 largest MSA Markets in the US. Since then, Westwood One has expanded its reach to more than 80 of the largest MSA markets. In 2000, Westwood One continues its expansion of products with its acquisition of the operating assets of SmartRoute Systems, Inc., a company which collects, organizes and distributes a database of advanced traveler information through various electronic media and telecommunications. Westwood One is managed by Infinity Broadcasting Corporation, a wholly owned subsidiary of Viacom Inc. Background from company press information. About Specimens Specimen Certificates are actual certificates that have never been issued. They were usually kept by the printers in their permanent archives as their only example of a particular certificate. Sometimes you will see a hand stamp on the certificate that says "Do not remove from file". Specimens were also used to show prospective clients different types of certificate designs that were available. Specimen certificates are usually much scarcer than issued certificates. In fact, many times they are the only way to get a certificate for a particular company because the issued certificates were redeemed and destroyed. In a few instances, Specimen certificates were made for a company but were never used because a different design was chosen by the company. These certificates are normally stamped "Specimen" or they have small holes spelling the word specimen. Most of the time they don't have a serial number, or they have a serial number of 00000. This is an exciting sector of the hobby that has grown in popularity over the past several years.