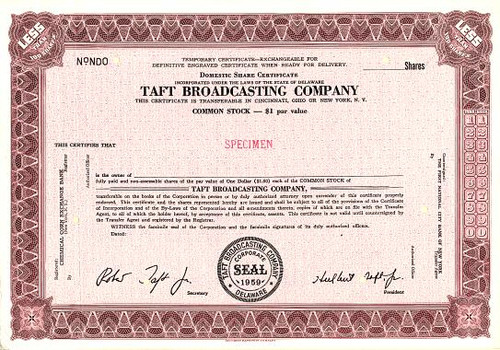 Beautifully engraved RARE Specimen certificate from the Taft Broadcasting Company printed in 1959. This historic document was printed by Security Bank Note Company and has an ornate border around it with the company's name on top center. This item has the printed signatures of the Company's President, Hulbert Taft, Jr. and Secretary, Robert Taft, Jr.. This is the first time we have had this certificate for sale. Taft Broadcasting began as Radio Cincinnati and Taft Radio, later becoming Taft Radio & Television and then Taft Broadcasting Company. It commenced with radio stations in the Cincinnati, leveraging the Times-Star. In 1957 it expanded into production and distribution through acquisition of Hanna-Barbera Productions. That house had been founded by Hanna and Barbera after closure of MGM's cartoon production operations. Taft subsequently acquired World Vision video production and distribution. In 1964 Taft acquired Transcontinent Television Corporation, which had originated as Buffalo-based WGR Corporation with the backing by members of the Goodyear, Schoelkoph and Knox families in 1954. It centred on the WGR television station and radio station(launched 1922); WGR subsequently acquired stations in Kansas City, Harrisonburg, Bakersfield and other markets. In 1969 Taft bought the Cincinnati Coney Island amusement park (unrelated to the facility of the same name in New York). It then established the Kings Island amusement park north of Cincinnati; Coney Island closed in 1971. In 1975 the group opened the Kings Dominion park as a joint venture (Family Leisure Centers) with Top Value Enterprises, a subsidiary of the Kroger supermarket chain. The joint venture was dissolved in 1980, with Kings Dominion becoming a wholly-owned subsidiary of Taft. In the following year the group took a major stake in the Canada's Wonderland park near Toronto. Robert Taft, Jr. (February 26, 1917December 7, 1993) served as a Republican Congressman between 1963 and 1965, and between 1967 and 1971. He also served as a U. S. Senator from Ohio between 1971 and 1976. Taft attended Yale University and Harvard University Law School. Taft served in the Ohio House of Representatives from 1955-1962 until winning election to the United States House of Representatives. Taft won election to the United States House of Representatives in 1962 as an at-large representative from Ohio (at-large seats were barred by the Voting Rights Act). In 1964, rather than running for re-election to the House, he ran for the U.S. Senate, but he lost to Stephen M. Young. In 1966, Taft returned to the House of Representatives, unseating Democratic incumbent (and future Governor of Ohio) John J. Gilligan. In 1968, Taft won re-election, defeating Democrat Carl F. Heiser. Taft then won Young's U.S. Senate seat six years after losing to him when Young did not run for re-election, running against Howard Metzenbaum. Taft, however, lost six years later in a rematch against Metzenbaum. He resigned six days before the end of his term to resume the practice of law. He was the great-great-grandson of Secretary of War Alphonso Taft, grandson of President William H. Taft, the son of Senator Robert Alphonso Taft I and Martha Wheaton Bowers. He married Blanca Duncan Noel. They were the parents of Ohio Governor Robert Alphonso Taft II and three other children. About Specimen Certificates Specimen Certificates are actual certificates that have never been issued. They were usually kept by the printers in their permanent archives as their only example of a particular certificate. Sometimes you will see a hand stamp on the certificate that says "Do not remove from file". Specimens were also used to show prospective clients different types of certificate designs that were available. Specimen certificates are usually much scarcer than issued certificates. In fact, many times they are the only way to get a certificate for a particular company because the issued certificates were redeemed and destroyed. In a few instances, Specimen certificates were made for a company but were never used because a different design was chosen by the company. These certificates are normally stamped "Specimen" or they have small holes spelling the word specimen. Most of the time they don't have a serial number, or they have a serial number of 00000. This is an exciting sector of the hobby that has grown in popularity over the past several years.