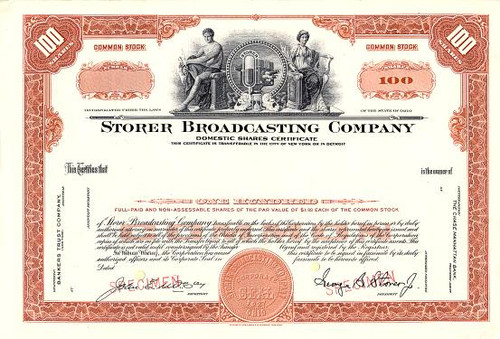 Beautifully engraved SPECIMEN certificate from the Storer Broadcasting Company. This historic document was printed by the Columbian Banknote Company and has an ornate border around it with a vignette of an alleogrical man and woman with a microphone and a video camera. This item has the printed signatures of the Company's President and Secretary. 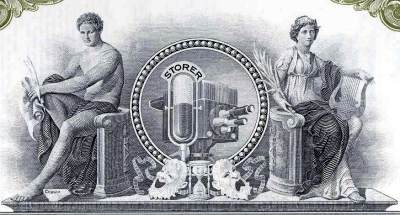 Certificate Vignette
Storer Broadcasting, Inc. was incorporated in Ohio in 1927. The company's name was changed to Storer Communications in 1983. The company had been primarily in the broadcast television and radio businesses. The company focused primarily on these two businesses through much of its history. However, it did venture into the cable television business in the early 1960's. In addition, it also purchased Northeast Airlines. George Storer was President of the company until his death. George's son, Peter Storer, became President in 1973. During the 1970's Peter Storer and the Storer Board of Directors decided to focus the company on cable television. Storer sold Northeast Airlines and its radio assets. It reinvested the funds into cable television. Commencing in 1978, it embarked on an aggressive program of acquiring cable franchises unlike many cable operators, Storer preferred to acquire franchises and build its cable sytems rather than acquire existing cable operations. As of end of 1984, Storer owned and operated seven television stations and held franchises to provide cable television service to over 500 communities in 18 states. As of December 31, 1984, Storer employed approximately 4800.