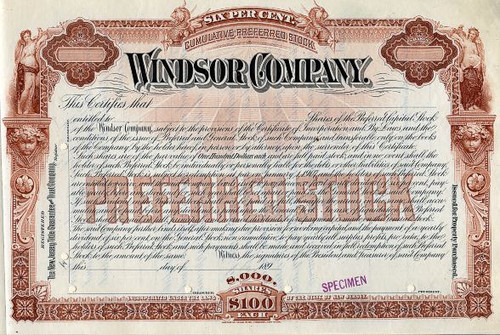 Beautifully engraved specimen certificate from the Windsor Company printed in 1892. This historic document was printed by the American Banknote Company and has an ornate border around it with a vignette of two allegorical women standing at the border of each side of the certificate.

Certificate Vignette
Windsor Print Works was located on 121 Union St., North Adams, Ma. The Windsor Print Works had a long history as a print works. The first facility was built in 1828 by Caleb Turner. The later complex was begun by the firm of Richardson, Freeman, and Co. in 1872, after the year of record profits by the textile industry. The company's fortunes soared during the latter part of the 19th Century, employing 600-800. It weathered some of the storms which swept the industry by making specialty fabrics. In 1891, the company became the Windsor Co. and then, in 1907, the Windsor Print Works. In the 1920's, the company became part of the Consolidated Textile Company. 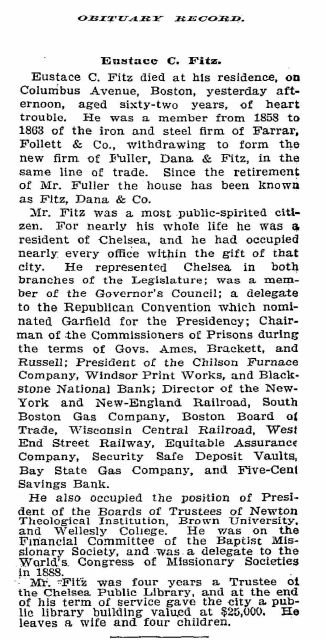 Eustace C. Fitz Obituary - Published on May 29, 1895 - The New York Times
OCR Scan unedited: Eustace C. Fitz died at hIs residence, on ~ o l u ~ b uAsve nue, Boston, yesterday afternoon, aged sisty-two years, of heart trouble. B e was a member from 1858 to 1863 of the iron and steel Arm af Famar, Fol!ett & Co., withdrawing to form the new firm of E'uller, Dana & Fitz, in the same line of trade. Since the retiremen! of lMr, Fuller the house has been known as Fitz, Dana & Co. Xr. Fitz was a most public-spirited citi- Zen. For &early his whole life he was a resident of Chelsea, and he had occupied nearly: every office d t f i i n the gift of that city. H e represented Chelsea in both branches of the Legislature; was a member of the Governor's Council; a delegate to the Republican Convention which nominated Garfield for the Presidency; Chairman of ;the .Commissioners of Prisons during the terms of Govs, Ames, Brackett, and Russell; President of the Chilson Furnace Company, Windsor Print Works, and Blackstone National Bank; Director of the New- York and New-England Railroad, South Boston Gas Company, Boston Board al Trade, TViscunsin Central Railroad, West End Street Railway, Equitable Assurance Company, Security Safe Deposit Vlaulta, Bay State Gas Company, and Five-Cent Savlngs Bank. He also occupied the position of President of the Boards of Trustees of Newton Theological Institution, Brown University. and ~ r e l l e s lC~o~lle ge. He was on the Financial Co-mmittee of the Bapcjst Misslonary Society, and .wasa. delegate to th-e Warld's. Congress of Missionary Socteties i. n. lm. - - 34%. F i t was four years a Trustee &t the Chelsea Public Library, and at the end of his term of service gave the city a public library building vaiyed at $25,000, He leaves a wife and four children.