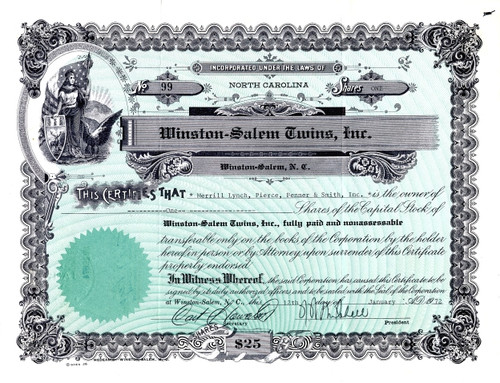 Beautiful certificate from Winston-Salem Twins, Inc. issued in 1972. This historic document was printed by GOES and has an ornate border around it with a vignette of a young woman, holding an American flag and a shield, beside an eagle. This item has been hand signed by the Company's President, and Secretary, and is over 40 years old. 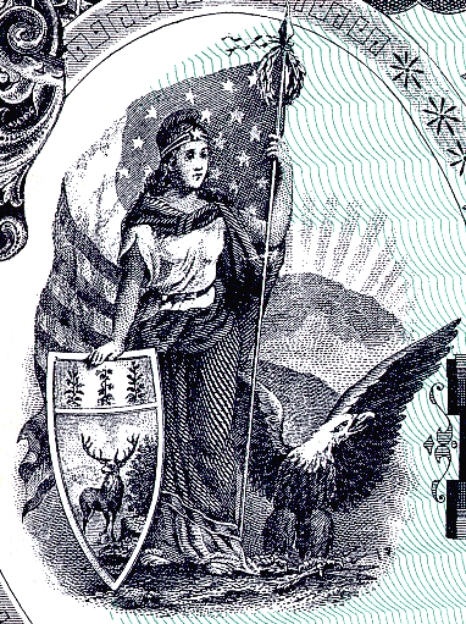 Certificate Vignette
The current franchise dates to 1945, and was originally known as the Cardinals. Previous baseball clubs in Winston-Salem had typically been called the "Twins", in reference to the long-since-merged "Twin Cities" of Winston and Salem since 1905. Prior to the Carolina League years, the Twins played in the Virginia-North Carolina League in 1905, the Carolina Baseball Association from 1908 to 1917 and the Piedmont League from 1920 to 1933 and again from 1937 to 1942. After a brief period (1957-60) as the Winston-Salem Red Birds, the team switched affiliation in 1961 to the Boston Red Sox. It remained with the Red Sox for 22 years, and was known until 1983 as the Winston-Salem Red Sox. In 1984, the team changed affiliates again, this time contracting with the Chicago Cubs, and changed its name to the Winston-Salem Spirits. The team initially retained the Spirits name after becoming the Cincinnati Reds A-level affiliate in 1993, winning the Carolina League championship in that same year. After two seasons with the Reds, the club decided to change its name and sponsored a contest through the local newspaper, the Winston-Salem Journal, to come up with a new name. The winning entry, the Warthogs, became the official team name in 1995. In addition to being alliterative, it also referred to the somewhat-celebrated acquisition of some warthogs at the state zoo around that time. As the Warthogs, they were the league champion in 2003. On December 4, 2008, the team publicly announced that they would be called the Winston-Salem Dash from 2009 onward. The Dash name is rumored to be attributed a nickname for the city of Winston-Salem, "The Dash," a reference to the dash (-) symbol used in the middle of the city's name, despite the fact that it is actually a hyphen. As the Warthogs, the team's mascot was Wally Warthog. With the new nickname, the Dash held a name-the-mascot contest for Wally's replacement. In keeping with the image of speed implied by "The Dash", the new mascot is a lightning-themed character named Bolt. Class-level Advanced-A Minor league affiliations Carolina League Southern Division Major league affiliations Chicago White Sox (1997-present) Cincinnati Reds (1993-1994) Chicago Cubs (1985-1992) Boston Red Sox (1961-1984) New York Yankees (1955-1956) St. Louis Cardinals (1945-1954, 1957-1960) Detroit Tigers (1941-1942) Cleveland Indians (1939) Brooklyn Dodgers (1938) Detroit Tigers (1937) New York Giants (1932) Name Winston-Salem Dash (2009-present) Winston-Salem Warthogs (1995-2008) Winston-Salem Spirits (1984-1994) Winston-Salem Red Sox (1961-1983) Winston-Salem Red Birds (1957-1960) Winston-Salem Cardinals (1945-1953) Winston-Salem Twins (1905, 1908-1917, 1920-1933, 1937-1942, 1954-1956) History from Wikipedia and OldCompany.com (old stock certificate research service).