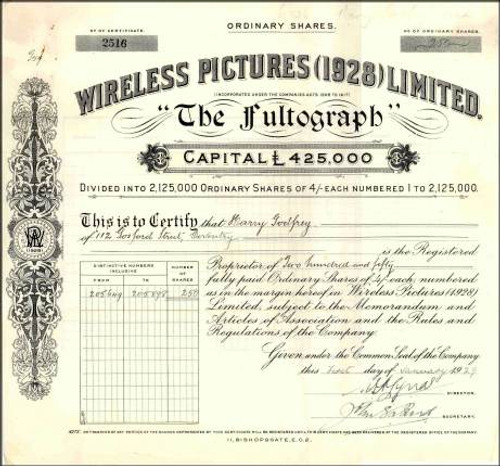 Beautifully engraved certificate from the Wireless Pictures (1928) Limited issued in 1929. This item is hand signed by the Company's Director and Secretary and is over 82 years old. It has an ornate side border with the company's name and the product name "The Fultograph" printed on top. In the pre-television era several attempts were made to supplement radio with a visual element. One of these was an electronic approach through which still pictures were broadcast to listeners through a fore-runner of the facsimile machine. Austrian inventor Captain Otho Fulton of Wireless Pictures Ltd, designed the experimental facsimile system he called the 'Fultograph'. The receiver had a 4inch x 5inch screen and cost £22 in 1929. Radio-Wien (Austria) began broadcasting pictures in this way in October 1928. Walter Smital described this development with considerable optimism in a talk on Radio-Wien early in 1929 as follows: You know, of course, that since the 15th October last year Radio Wien has been broadcasting pictures in order, at least partly, to complete optically the ordinary broadcasts. The somewhat high price of the necessary apparatus, and the relative crudeness of the results achieved at first, were the reasons that not many people availed themselves of this service. But since the middle of January of the present year the method of transmission has been improved to such a degree that now, for the first time, it is possible to transmit pictures of all kinds... any photographic negative whatever may be broadcast by radio as soon as it has been developed.[74] Despite improvements in the reproductive capacity of this process, it did not win public acceptance. At the onset of the Depression the promise of a few pictures a day could hardly have offset the cost involved in acquiring the necessary equipment, especially when universal ownership of a radio was far from being achieved in even the most developed countries.