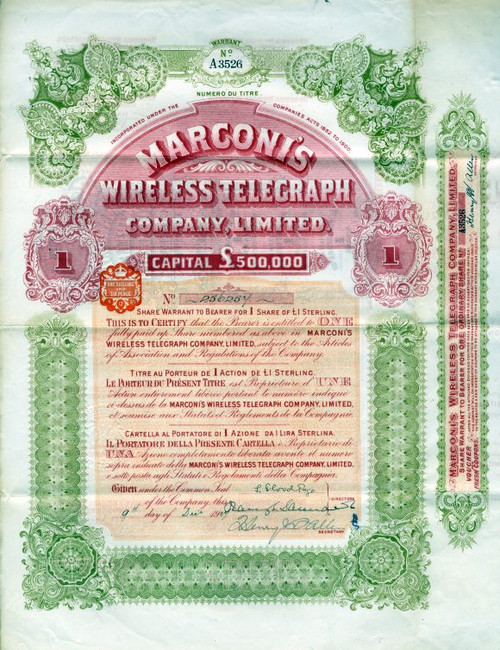 Beautiful certificate from the Marconi's Wireless Telegraph Company, Limited issued in 1907. This historic document was printed by T.H. Saunders and has an ornate border around it. This item has been hand signed by the Company's Directors, and Assistant Secretary, and is over 113 years old. Revenue stamp affixed to face. Normal folds in excellent condition. 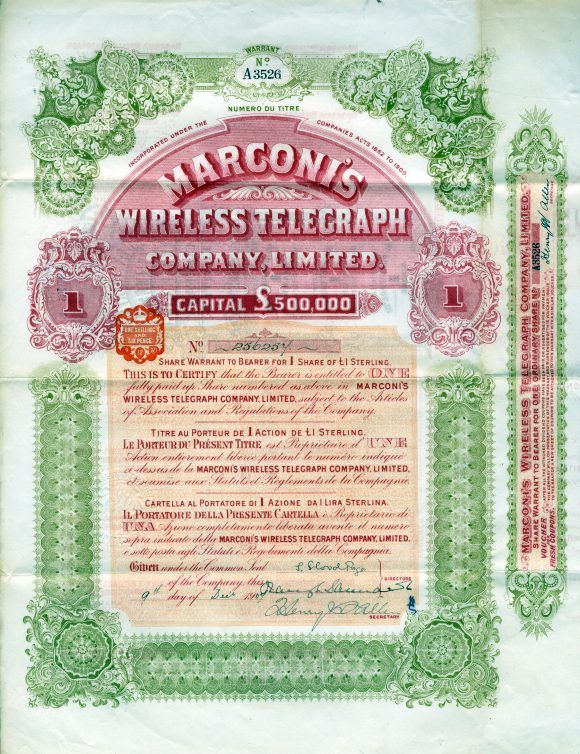 Certificate
In 1897 Marconi registered the company Wireless Telegraph and Signal Company and in 1898 the first wireless factory was set up in Chelmsford. In 1900 the company was renamed Marconi's Wireless Telegraph Company, Ltd (MWCT). Marconi's first aim in perfecting communication without wires was to break the isolation of those at sea. When the Titanic struck an iceberg and sank in 1912, the loss of life was truly terrible, but those who survived owed their lives to the distress calls from the Marconi wireless equipment on board. MWCT was recognised as the pioneers of trans-oceanic and maritime wireless services. In 1897, Guglielmo Marconi formed The Wireless Telegraph & Signal Company Limited (in 1900 re-named Marconi's Wireless Telegraph Company Limited). In the same year he gave a demonstration to the Italian Government at Spezia where wireless signals were sent over a distance of twelve miles. In 1899 he established wireless communication between France and England across the English Channel. He erected permanent wireless stations at The Needles, Isle of Wight, at Bournemouth and later at the Haven Hotel, Poole, Dorset. In 1900 he took out his famous patent No. 7777 for "tuned or syntonic telegraphy" and, on an historic day in December 1901, determined to prove that wireless waves were not affected by the curvature of the Earth, he used his system for transmitting the first wireless signals across the Atlantic between Poldhu, Cornwall, and St. John's, Newfoundland, a distance of 2100 miles. Between 1902 and 1912 he patented several new inventions. In 1902, during a voyage in the American liner "Philadelphia", he first demonstrated "daylight effect" relative to wireless communication and in the same year patented his magnetic detector which then became the standard wireless receiver for many years. In December 1902 he transmitted the first complete messages to Poldhu from stations at Glace Bay, Nova Scotia, and later Cape Cod, Massachusetts, these early tests culminating in 1907 in the opening of the first transatlantic commercial service between Glace Bay and Clifden, Ireland, after the first shorter-distance public service of wireless telegraphy had been established between Bari in Italy and Avidari in Montenegro. In 1905 he patented his horizontal directional aerial and in 1912 a "timed spark" system for generating continuous waves. In 1914 he was commissioned in the Italian Army as a Lieutenant being later promoted to Captain, and in 1916 transferred to the Navy in the rank of Commander. He was a member of the Italian Government mission to the United States in 1917 and in 1919 was appointed Italian plenipotentiary delegate to the Paris Peace Conference. He was awarded the Italian Military Medal in 1919 in recognition of his war service. During his war service in Italy he returned to his investigation of short waves, which he had used in his first experiments. After further tests by his collaborators in England, an intensive series of trials was conducted in 1923 between experimental installations at the Poldhu Station and in Marconi's yacht "Elettra" cruising in the Atlantic and Mediterranean, and this led to the establishment of the beam system for long distance communication. Proposals to use this system as a means of Imperial communications were accepted by the British Government and the first beam station, linking England and Canada, was opened in 1926, other stations being added the following year. In 1931 Marconi began research into the propagation characteristics of still shorter waves, resulting in the opening in 1932 of the world's first microwave radiotelephone link between the Vatican City and the Pope's summer residence at Castel Gandolfo. Two years later at Sestri Levante he demonstrated his microwave radio beacon for ship navigation and in 1935, again in Italy, gave a practical demonstration of the principles of radar, the coming of which he had first foretold in a lecture to the American Institute of Radio Engineers in New York in 1922. Marconi history from The Nobel Foundation. Company research by OldCompany.com (old stock certificate research service).