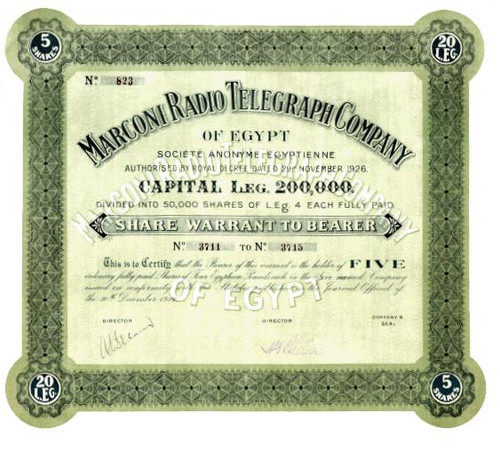 Beautifully engraved early 5 Share certificate from Marconi Radio Telegraph Company of Egypt issued in 1926. This historic document has an ornate border around it with the company's name on top center. There are also 3 unused coupons attached on the bottom. This item has the signatures of the Company's Directors and is over 92 years old. Shows some signs of wear. In 1914 a Marconi radio station was built in Cairo, working in competition with the Eastern Telegraph Company's cables until the late 1920's when the two services were combined. Guglielmo Marconi was born at Bologna, Italy, on April 25, 1874, the second son of Giuseppe Marconi, an Italian country gentleman, and Annie Jameson, daughter of Andrew Jameson of Daphne Castle in the County Wexford, Ireland. He was educated privately at Bologna, Florence and Leghorn. Even as a boy he took a keen interest in physical and electrical science and studied the works of Maxwell, Hertz, Righi, Lodge and others. In 1895 he began laboratory experiments at his father's country estate at Pontecchio where he succeeded in sending wireless signals over a distance of one and a half miles, thus becoming the inventor of the first practical system of wireless telegraphy. In 1896 Marconi took his apparatus to England where he was introduced to Mr. (later Sir) William Preece, Engineer-in-Chief of the Post Office, and later that year was granted the world's first patent for a system of wireless telegraphy. He demonstrated his system successfully in London, on Salisbury Plain and across the Bristol Channel, and in July 1897 formed The Wireless Telegraph & Signal Company Limited (in 1900 re-named Marconi's Wireless Telegraph Company Limited). In the same year he gave a demonstration to the Italian Government at Spezia where wireless signals were sent over a distance of twelve miles. In 1899 he established wireless communication between France and England across the English Channel. He erected permanent wireless stations at The Needles, Isle of Wight, at Bournemouth and later at the Haven Hotel, Poole, Dorset. In 1900 he took out his famous patent No. 7777 for "tuned or syntonic telegraphy" and, on an historic day in December 1901, determined to prove that wireless waves were not affected by the curvature of the Earth, he used his system for transmitting the first wireless signals across the Atlantic between Poldhu, Cornwall, and St. John's, Newfoundland, a distance of 2100 miles. Between 1902 and 1912 he patented several new inventions. In 1902, during a voyage in the American liner "Philadelphia", he first demonstrated "daylight effect" relative to wireless communication and in the same year patented his magnetic detector which then became the standard wireless receiver for many years. In December 1902 he transmitted the first complete messages to Poldhu from stations at Glace Bay, Nova Scotia, and later Cape Cod, Massachusetts, these early tests culminating in 1907 in the opening of the first transatlantic commercial service between Glace Bay and Clifden, Ireland, after the first shorter-distance public service of wireless telegraphy had been established between Bari in Italy and Avidari in Montenegro. In 1905 he patented his horizontal directional aerial and in 1912 a "timed spark" system for generating continuous waves. In 1914 he was commissioned in the Italian Army as a Lieutenant being later promoted to Captain, and in 1916 transferred to the Navy in the rank of Commander. He was a member of the Italian Government mission to the United States in 1917 and in 1919 was appointed Italian plenipotentiary delegate to the Paris Peace Conference. He was awarded the Italian Military Medal in 1919 in recognition of his war service. During his war service in Italy he returned to his investigation of short waves, which he had used in his first experiments. After further tests by his collaborators in England, an intensive series of trials was conducted in 1923 between experimental installations at the Poldhu Station and in Marconi's yacht "Elettra" cruising in the Atlantic and Mediterranean, and this led to the establishment of the beam system for long distance communication. Proposals to use this system as a means of Imperial communications were accepted by the British Government and the first beam station, linking England and Canada, was opened in 1926, other stations being added the following year. In 1931 Marconi began research into the propagation characteristics of still shorter waves, resulting in the opening in 1932 of the world's first microwave radiotelephone link between the Vatican City and the Pope's summer residence at Castel Gandolfo. Two years later at Sestri Levante he demonstrated his microwave radio beacon for ship navigation and in 1935, again in Italy, gave a practical demonstration of the principles of radar, the coming of which he had first foretold in a lecture to the American Institute of Radio Engineers in New York in 1922. He has been the recipient of honorary doctorates of several universities and many other international honours and awards, among them the Nobel Prize for Physics, which in 1909 he shared with Professor Karl Braun, the Albert Medal of the Royal Society of Arts, the John Fritz Medal and the Kelvin Medal. He was decorated by the Tsar of Russia with the Order of St. Anne, the King of Italy created him Commander of the Order of St. Maurice and St. Lazarus, and awarded him the Grand Cross of the Order of the Crown of Italy in 1902. Marconi also received the freedom of the City of Rome (1903), and was created Chevalier of the Civil Order of Savoy in 1905. Many other distinctions of this kind followed. In 1914 he was both created a Senatore in the Italian Senate and app ointed Honorary Knight Grand Cross of the Royal Victorian Order in England. He received the hereditary title of Marchese in 1929. In 1905 he married the Hon. Beatrice O'Brien, daughter of the 14th Baron Inchiquin, the marriage being annulled in 1927, in which year he married the Countess Bezzi-Scali of Rome. He had one son and two daughters by his first and one daughter by his second wife. His recreations were hunting, cycling and motoring. Marconi died in Rome on July 20, 1937. From Nobel Lectures, Physics 1901-1921, Elsevier Publishing Company, Amsterdam

Palestine Bond from the Head Committee of Nile Valley - 1948