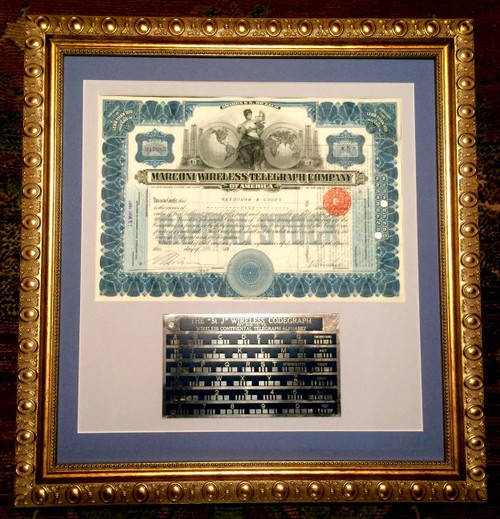 Classic antique, gold frame with an overall size of 16 5/8" x 17 5/8". Wood frame is 1 1/4" wide. Double matting with archival mounting for the certificate. Price includes priority shipment within the continental U.S. Otherwise, shipment will be actual cost. Beautifully engraved certificate from the Marconi Wireless Telegraph Company dated no later than 1916. This historic document was printed by the American Banknote Company and has an ornate border around it with a vignette of an allegorical woman holding a balance scale in front of two globes with telegraph transmission towers in the background. This item has the printed signatures of the Company's President and Secretary. Below the certificate is a wireless codegraph brass plate dated August 13, 1912 - 4 months after Titanic sinking The plate measures approximately 6 1/2" by 4 inches. This plate is a unique piece of wireless history. The plate says : The "St. J" Wireless Codegraph Patent August 13, 1912 Wireless Continental Telegraph Alphabet The Radio Act of 1912 was an Act To regulate radio communication and was a United States federal law that mandated that all radio stations in the United States be licensed by the federal government, as well as mandating that seagoing vessels continuously monitor distress frequencies. The original bill was initiated during the investigations following the sinking of the Titanic. The act set a precedent for international and federal legislation of wireless communications. The need for ship and coast radio stations to have and use radiotelegraph equipment, and to listen to a common radio frequency for Morse encoded distress calls, was recognized after the sinking of the liner RMS Titanic in the North Atlantic in 1912. The U.S. Congress enacted legislation soon after, requiring U.S. ships to use Morse code radiotelegraph equipment for distress calls. The International Telecommunications Union (ITU), now a United Nations agency, followed suit for ships of all nations. Morse encoded distress calling has saved thousands of lives since its inception almost a century ago, but its use requires skilled radio operators spending many hours listening to the radio distress frequency. Its range on the medium frequency (MF) distress band (500 kHz) is limited, and the amount of traffic Morse signals can carry is also limited. St. John, Newfoundland, Canada is where Italian physicist and radio pioneer Guglielmo Marconi succeeded in sending the first radio transmission across the Atlantic Ocean on December 12, 1901. The messagesimply the Morse-code signal for the letter "s"traveled more than 2,000 miles from Poldhu in Cornwall, England, to St. John, Newfoundland, Canada. History from Wikipedia and OldCompany.com (old stock certificate research service)