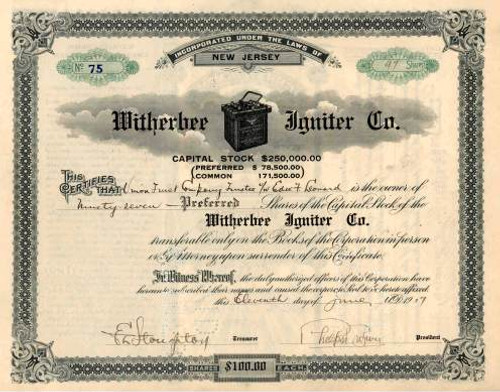 Beautifully engraved certificate from the Witherbee Igniter Co. issued in 1917. This historic document has an ornate border around it with a vignette of a Witherbee Battery. This item is hand signed by the Company's President and Treasurer and is over 88 years old. This is the first time we have seen this certificate for sale. 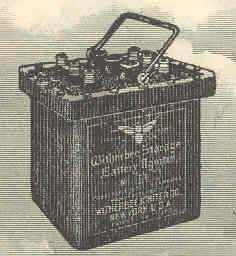 Certificate Vignette
Witherbee Igniter Company become the Wico Electric Company which was located in Springfield,Ma. The company built quiality ignition systems for stationary engines. Early magentos were an oscillating design and were made for 1 and 2 cylinder engines. They eventually lost favor because they were very noisy and were difficult to adjust. Later variants incorporated a set of points and a more traditional coil setup. Wico Electric Company's products were used in automobiles and were most popular on John Deere tractors, Case tractors, and Wisconsin engines. They were also used on many other engines. The company merged with Globe-Union in 1956. Globe Union was eventually acquired by Johnson Controls in 1978.