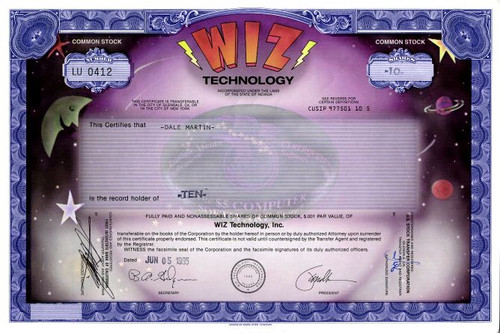 Beautifully engraved certificate from the Wiz Technology - 1995 This historic document was printed by the American Banknote Company and has an ornate border around it with colorful images of planets, stars and the moon. This item has the printed signatures of the Company's President and Secretary, and is over 20 years old. Nice looking Certificate but not so nice looking financial results. 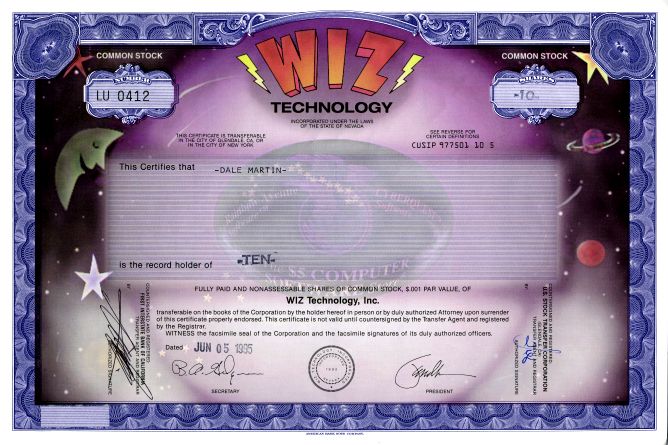 Certificate
Wiz operated two divisions that published and distributed computer software and the design and marketing of Intranet systems. SAN JUAN CAPISTRANO, Calif.--(BUSINESS WIRE)--May 30, 1995--Wiz Technology, Inc., launched its new CD-ROM product line today with initial shipments of its "World of Multimedia CD-ROM 10 Pack" to computer retailers and distributors throughout the United States, Canada and 11 other nations. Wiz Technology (AMEX:WIZ or WIZ.EC) is a publisher and marketer of budget software for the home, education and small business markets. The company said its initial production of 100,500 discs includes 10 top selling commercial software programs formatted for IBM and IBM compatible computers. Mar-Jeanne Tendler, chairman and chief executive officer, said the "10 Packs" are expected to retail in the $39.95 to $59.95 range. She said the shipments mark the company's entry into the "new world" of high quality, low-priced CD-ROMs, adding "our 10 titles are all among the nation's leading CD-ROM programs that, individually under other labels, commonly sell for more than the price of our 10 pack." She said she believes "Wiz is setting the standard, and will continue to be the leader, in the publishing of high quality CD-ROM software at prices everyone can afford." Programs in the "10 Pack" include "The King James Version" of the Bible; "The Electronic Home Library," containing more than 925 of the greatest literary works; "Card and Casino Games"; "The Family Doctor," a health and medical guide for the home; "Shadow President," in which viewers take the place of the president of the United States and chose courses of action that change the world; "Money in the 90s"; "Four Footed Friends," children's entertainment for learning about animals and languages; "Solid Gold Fonts," providing more than 5,000 fonts, icons, wallpaper and sound files for Windows; "Electric Reading Land," an educational program to learn basic reading and vocabulary skills, and "Professor Multimedia," an educational program on the world of multimedia. CONTACT: Wiz Technology, Inc. Mar-Jeanne Tendler, 714/443-3000 March 5, 1997--A class action has been commenced in the California Superior Court for Orange County on behalf of purchasers of Wiz Technology, Inc. ("Wiz") common stock during the period December 11, 1995 to November 11, 1996. The complaint charges Wiz and certain of its officers and directors with violations of the California Corporations, Civil and Business & Professions Codes, which violations involve the issuance of false financial statements and other positive statements. Defendants used the inflated share value of Wiz stock to acquire another software company before the truth concerning Wiz's business and finances began to be revealed. Wiz's stock price, which had traded as high as $9 per share during the Class Period, traded down to $2.50 before trading was halted. The American Stock Exchange American Stock Exchange (AMEX) History from OldCompany.com (old