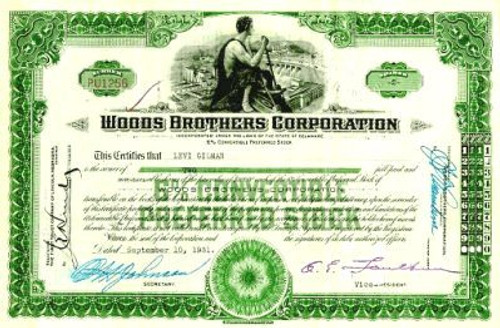 Beautifully engraved certificate from the Woods Brothers Corporation issued in the 1930's. This historic document has an ornate border around it with a vignette of a dam. This item has the signatures of the Company's President and Secretary.

Certificate Vignette
This company was the largest heavy equipment company in the world during the 1920's and 30's. They did extensive work on the Mississippi and Missouri Rivers and also on the Gulf Coast. They were one of 5 bidders on the Boulder ( then Hoover) Dam. This is the first time we have seen a non government bond dam vignette before. According to the Woods Bros. Realty Home page (at http://www.woodsbrosrealty.com ) in 1873 Col. Frederick M. Woods moved from Illinois to Lincoln, Nebraska and in 1889 three of his sons, Mark, Frank and George founded Woods Brothers Companies with the Colonel. This was the genesis of Woods Bros. Realty. They were involved in land sales, residential and commercial development, nurseries, river construction and containment work, farming, telephone companies, street car companies, truck manufacturing, and they pioneered the fledgling aviation industry. They were leaders in everything that helped Lincoln grow into one of America's finest cities. Since the turn of the century, land development has been the keystone to the Woods Bros. Enterprises. More than 25% of all Lincoln's families live in Woods Bros. additions totaling 6,600 acres. These 67 additions developed by the Woods Bros. family and their associates have provided homes for six generations of Lincoln families.