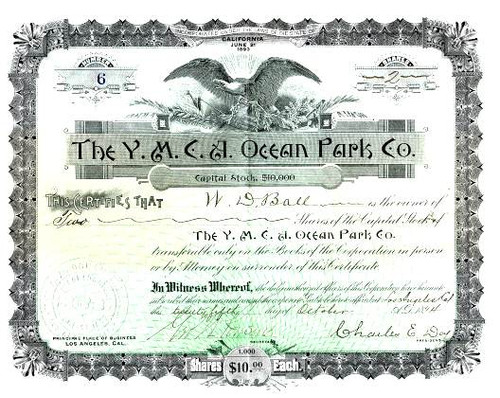 Beautifully printed RARE certificate #6 from the Y.M.C.A. Ocean Park Company issued in 1894. This historic document has an ornate border around it with a vignette of an eagle and shield. This item is hand signed by the Company's President ( Charles E. Day ) and Secretary ( George Parsons ) and is over 115 years old. 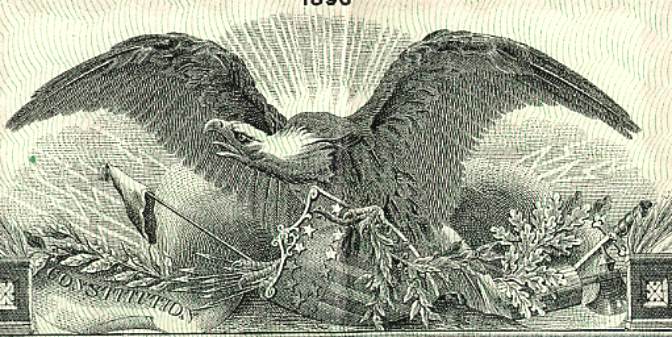 Certificate Vignette
In June 1893, the Southern California YMCA decided to build a bathhouse & two story pavilion on donated land in Santa Monica. They called the company that owned the property the Y.M.C.A. Ocean Park Company and it was incorporated in June 1893. This is how the Ocean Park area of Santa Monica got its name. In 1894, the YMCA of Southern California sold the property of the Y.M.C.A. Ocean Park Company which include 5 acres. In 1895, the new owners, Abbot Kinney and Francis Ryan, built a 500 foot long pier into the ocean just south of Hill Street in September. The community grew slowly until there were nearly 150 cottages by Spring 1898. That year proved to be a boom year as several new business buildings and forty beach cottages were constructed. Kinney's new 40 acre Ocean Park race track and golf links located near their Casino Country Club at southern end of the property opened. The City of Santa Monica on June 30, 1898 granted Kinney and Ryan permission to build a 1250 foot long pier at Pier Avenue on pilings already being used to carry the city's 200 foot long outfall sewer. The pier served two purposes; to protect and extend the sewage pipes seaward so the currents wouldn't pollute their property south of it, and as a pleasure wharf for tourists and fishermen. The pier was completed in less than six weeks.