Beautiful certificate from War time in Yemen issued in 1963. This historic document has decorative stamps on the front and back. This item is over 49 years old. 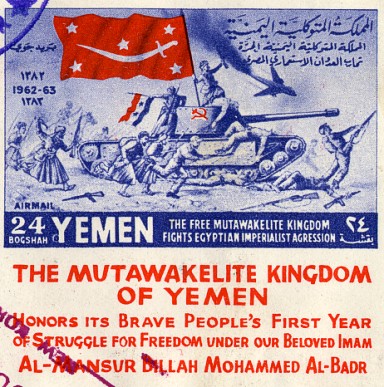 Stamp Example
The North Yemen Civil War was fought in North Yemen between royalists of the Mutawakkilite Kingdom of Yemen and factions of the Yemen Arab Republic from 1962 to 1970. The war began with a coup d'Ã©tat carried out by the republican leader, Abdullah as-Sallal, which dethroned the newly crowned Imam al-Badr and declared Yemen a republic under his presidency. The Imam escaped to the Saudi Arabian border and rallied popular support. On the royalist side Jordan and Saudi Arabia supplied military aid, and Britain gave diplomatic support, while the republicans were supported by Egypt and allegedly received warplanes from the Soviet Union.[9] Both foreign irregular and conventional forces were involved. The Egyptian President, Gamal Abdel Nasser, supported the republicans with as many as 70,000 Egyptian troops. Despite several military moves and peace conferences, the war sank into a stalemate. Egypt's commitment to the war is considered to have been detrimental to its performance in the Six-Day War of June 1967, after which Nasser found it increasingly difficult to maintain his army's involvement and began to pull his forces out of Yemen. Egyptian military historians refer to the war in Yemen as their Vietnam,and historian Michael Oren (current Israeli Ambassador to the U.S) wrote that Egypt's military adventure in Yemen was so disastrous that "the imminent Vietnam War could easily have been dubbed America's Yemen." History from Encyberpedia and OldCompany.com (old stock certificate research service)