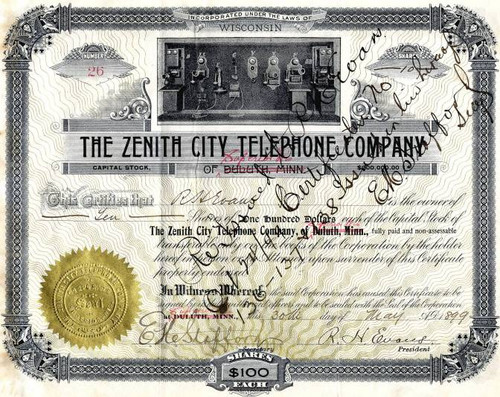 Beautiful stock certificate #26 from the Zenith City Telephone Company of Superior Wisconsin issued in 1899. This historic document has an ornate border around it with a vignette of early telephones. This item has the hand signed signatures of the Company's President, R.H. Evans, and Secretary, and is over 117 years old. The certificate had the name Duluth, Minn. printed, but was cross out and changed to Superior, Wisconsin.

Certificate Vignette
The following is from "A WEEKLY REVIEW OF CURRENT PROGRESS IN ELECTRICITY AND ITS PRACTICAL APPLICATIONS. VOLUME XL. FROM JULY 5 TO DECEHBER 27, 1902. ...The Zenith City Telephone Company of Duluth is the second largest independent telephone company in the State of Minnesota. It commenced construction in 1899 and at that time the Bell Company in Duluth had 700 subscribers. At the present time the Zenith City Telephone Company has about 1,900 subscribers in Duluth and it is unable to keep pace with the demand. Closely allied with the Zenith City Telephone Company is the People's Telephone Company of West Superior, Wisconsin, which began business at the same time and has been as prosperous as the Zenith City Company. These two companies are connected with the Twin City Telephone Company of Minneapolis and St. Paul by a long distance line carrying three No. 10 copper circuits. This line belongs to the Consolidated Telephone and Telegraph Company, a corporation composed of officers of the Twin City Telephone Company. This connecting line is doing a good business and must have made some impression on the American Telephone and Telegraph Company, which it parallels, since immediately upon the completion of the consolidated line the American Telephone and Telegraph charge was cut from 75 cents between the Twin Cities and the head of the lakes to 40 cents, the Consolidated Company having made its rate considerably lower than the old rate. The company is doing a very satisfactory business and has some 28 stations on its line, which is about 150 miles long, the through business between the head of the lakes and the Twin Cities being especially good...