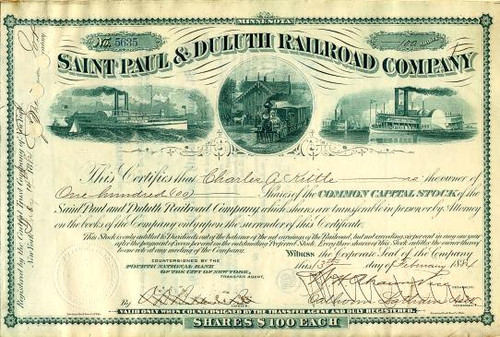 Beautifully engraved certificate from the Saint Paul & Duluth Railroad Company issued in 1884. This historic document was printed by the American Bank Note Company and has an ornate border around it with a vignette of a train and 2 paddlewheeler steamships. This item is hand signed by the Company's Vice President, and Secretary and is over 122 years old.

Certificate Vignette
The Saint Paul and Duluth Railroad was originally incorporated in 1863 and known as the Lake Superior and Mississippi Railroad. The road provided the first service between Duluth and the Twin Cities upon its completion in 1870. Serving as the all-important eastern terminus of the Northern Pacific Railroad, the road linked the Great Lakes and the Mississippi River. A victim of the panic of 1873, the company defaulted on its bonds and was reorganized in 1877 as the Saint Paul and Duluth Railroad. It was absorbed by the Northern Pacific in 1900.