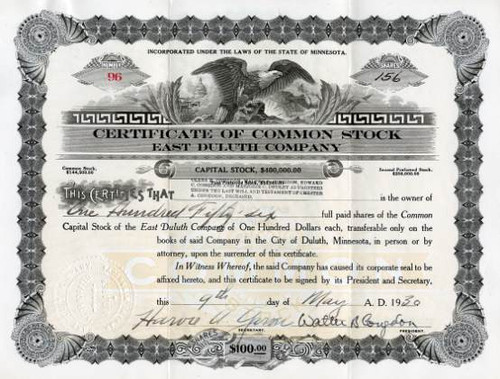 Beautifully engraved certificate from the East Duluth Company issued in 1930. This historic document has an ornate border around it with a vignette of an eagle perched in front of the Capitol building and a U.S. fort. This item is hand signed by the Company's President ( Walter B. Congdon ) and Secretary and is over 82 years old. The certificate was issued to the Trustees of the estate of Chester A. Congdon.

Certificate Vignette
The Trustees listed on the certificate were: Clara Hesperia Bannister Congdon (4/29/1854 7/12/1950)- Wife Walter Bannister Congdon (11/5/1882 10/20/1949)- Son Edward Chester Congdon (5/20/1885 11/27/1940) - Son Marjorie Congdon [Dudley] (1/12/1887 10/11/1971) - Daughter Glensheen, Duluth's American Castle, as showcased on Art and Entertainment's America's Castles, is a 7.6 acre estate built between 1905-08 by Chester A. Congdon. The estate's gently sloping terrain may have enticed Mr. Congdon and his wife, Clara, to select this site for their family home. The area was heavily wooded then and the lake shore was rugged. Yet they saw the potential and an idea for a family home evolved into a formal estate. Glensheen resembles an English, early seventeenth century country estate. The focal point of English estates were the manor house which were located near the center of the property. Formal gardens dotted the grounds and added color. What is phenomenal about Glensheen is that, to this day, it closely resembles the way it looked when the Congdon family first moved in on November 24, 1908. The majority of the furnishings are original to the time the estate was first occupied. However there are items to the collection that were added while the family lived in the home. Glensheen is historically important because of its original condition. A significant part of Duluth's history has been preserved at Glensheen and is available for you to experience. In 1968, Glensheen was given to the University of Minnesota by the heirs of Chester and Clara Congdon. The goal was to preserve Glensheen and use it for "public pursuits which might not otherwise be available because of growing pressure to budget demands upon public and educational institutions." On July 28, 1979, the estate was opened to the public as a museum. Since then over 2 million people have experienced a visit to Glensheen. The 7.6-acre, 1900-era neo-Jacobean estate built by Chester Congdon ranks among the state's most beautiful pieces of real estate. Congdon and his wife, Clara, designed this mansion for their large family. Glensheen's 39 rooms still have many of the original furnishings and boast stunning views of Lake Superior. Tour two or all four floors. There are guided and unguided grounds tours, including a bedroom-slipper tour, for which you wear slippers and walk behind the ropes. Most visitors go to see the inside of the gorgeous old house, but some come because it's the site of one of the state's most notorious murders. In 1977, heiress Elisabeth Congdon and her nurse were bludgeoned and smothered to death in a case of insurance fraud. Fans of the paranormal rank the mansion among Minnesota's haunted houses. On June 27, 1977, an intruder entered Glensheen, the stately manor built along the Lake Superior shore by Chester A. Congdon, patriarch of one of Duluth, Minnesota's most generous and respected families. Before leaving with a basketful of stolen jewelry, the intruder used a satin pillow to smother Chester's last surviving daughter, Elisabeth Congdon, after killing the heiress's valiant nurse, Velma Pietila, by beating her with a candlestick--crimes set in motion by a hastily hand-written will penned just days before the killings. Elisabeth Mannering Congdon, the last surviving child of Chester and Clara Congdon, who built Glensheen on the shore of Lake Superior in Duluth, Minnesota. Elisabeth and nurse Velma Pietila were murdered in Glensheen June 27, 1977. Elisabeth's son-in law, Roger Caldwell, was convicted of two counts of murder. Her adopted daughter Marjorie who she adopted in 1932 was acquitted. History from University of Minnesota, Duluth.