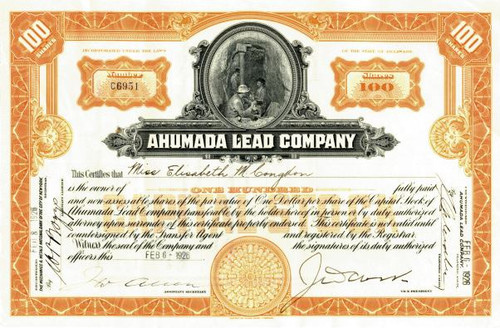 Beautifully engraved certificate from the Ahumada Lead Company issued in 1926. This historic document was printed by the American Banknote Company and has an ornate border around it with a vignette of men working inside of a mine. This item is hand signed by the company's vice-president and assistant secretary and is over 85 years old. The certificate was issued to Elisabeth Mannering Congdon, the last surviving child of Chester and Clara Congdon who was murdered in the Glensheen Estate and is said to haunt it.