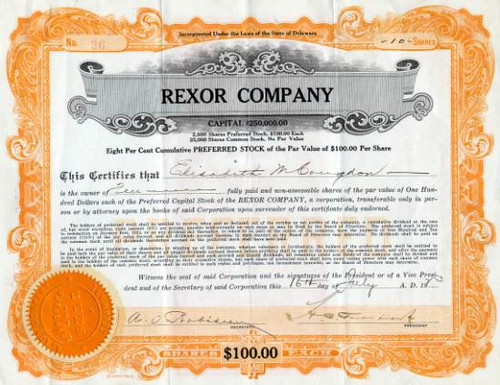 Beautifully engraved certificate from the Rexor Company issued in 1924. This historic document was printed by the Goes Lithograph Company and has an ornate border around it. This item is hand signed by the Company's President and Secretary and is over 81 years old. The certificate was issued to Elisabeth Mannering Congdon and signed by her on the verso on December 5, 1929. Elisabeth was the last surviving child of Chester and Clara Congdon and was murdered in the Glensheen Estate and is said to haunt it. Elisabeth Mannering Congdon (Apr. 22, 1894 - Jun. 27, 1977 Duluth St. Louis County Minnesota, USA) was a millionaire resident of Duluth, Minnesota, she was made famous as the result of the brutal murder that took place at her residence on 27 June 1977, when her nurse was found bludgeoned to death, and she lifeless as the result of asphyxiation. Elisabeth Mannering Congdon was born to Chester A. and Clara Congdon in 1895. Elisabeth grew up in a fairly normal family, except the fact that she and her relatives were enormously wealthy. In 1905, Elisabeth's father Chester had work begun on their infamous 7.6 acre estate in Duluth, Minnesota, the Glensheen Estate. it took three years to build, and sports a 17th Century look, and has a vast amount of rooms, with well over 50 rooms. Over 2 million visitors and tourists have made a visit to the estate since it was opened to the general public in 1979. In 1968 the Estate was given to the University of Minnesota, Duluth, and the current address is 3300 London Road, Duluth, MN 55804. In 1932 Elisabeth, a single woman in her thirties, adopted a daughter named Marjorie. Marjorie was always the black sheep of the family, borrowed money from her mother non-stop, and married many times. She met a man named Roger Caldwell in her final marriage, and they were just alike. She and Roger kept bugging Elisabeth for money, reportedly so they could make their dream a reality, and open a horse ranch. Marjorie and Roger, however, were never satisfied. Marjorie was diagnosed a sociopath early in her life, was put into institutions, and for a time, looked as if she was improving. Marjorie had a few children, and she spoiled them with luxuries, the majority of these luxuries having being furnished by Elisabeth. Marjorie divorced two times. Congdon was an heiress to a mining fortune, later inherited from her relatives. On 27 June, 1977, Elisabeth Congdon and her nurse, Velma Pietila were found murdered. Pietila had been beat to death with a candlestick, and her boss, Elisabeth Congdon was found suffocated in her bed. Little valuables were looted from the room, so what was the motive? Marjorie Congdon was to recieve 8 million dollars from her mother at the time of her death. Also, Marjorie had authored a paper saying Roger was to recieve about 3 million of her share, it is ironic how this paper was authored 3 days before Elisabeth's death. This was the motive. Marjorie and Roger were having financial difficulties, and it is believed Elisabeth's own daughter conspired against her just to get 8 million dollars, she paid off the killer, Roger, with 3 million of what she got. The authorities never proved the perpetrators of the crime was Marjorie and her husband, though they had substantial evidence to do so, including a letter, and a ring of Elisabeth's that Marjorie was found wearing after her mother's death. Marjorie was sent to prison for arson a number of times, and Roger was going insane. Caldwell committed suicide in 1988. Marjorie was schedule to be released from prison some time from 2003 to 2005. Elisabeth Congdon's net worth was worth over 40 million US dollars at the time of her death. It is rumored that Elisabeth Congdon still haunts her old estate. The University of Minnesota, Duluth also maintains this.