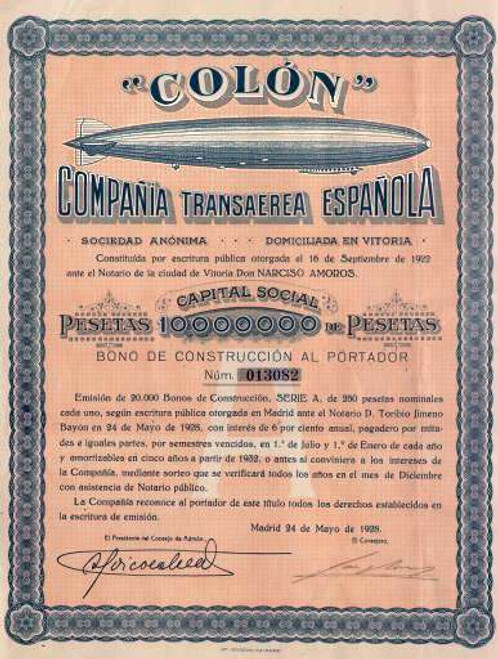 Beautiful certificate from the Colon Compania Transaerea Espanola issued in 1928. This historic document has an ornate border around it with a vignette of an early Zeppelin airship. This item is handsigned and is over 91 years old. There are also 11 unused coupons attached to the certificate not shown in the scan. Airship vignettes are very scare and desirable. There are two main types of airships, rigid and nonrigid. Rigid airships have a skeleton, or framework, of aluminum or some other lightweight but strong material. The frame is covered with a tightly stretched skin of cloth or some other fabric. Lightweight metal is sometimes used instead of cloth to cover the frame. A number of bags of light gas are inside the frame. If one bag breaks or leaks, the others keep the ship aloft. Rigid airships remain the same shape, even if there is no gas inside them. They are sometimes called dirigibles, from a French word for ``steerable.'' They are also called zeppelins, after Count Ferdinand von Zeppelin of Germany, who designed the first rigid airships that worked well. Nonrigid airships are called blimps. Blimps do not have a complete inside frame. They depend on the pressure of the gas inside to keep them inflated to their normal shape. They may have a number of separate gas sections so that a gas leak in one section will not cause the blimp to come down suddenly. Nonrigid airships are the kind most often seen today. Development of the Airship Henri Gifford of France in 1852 flew a long sausage-shaped balloon filled with hydrogen for 17 miles (27 km) at 5 miles an hour (8 km/hr). He used a three-horsepower steam engine to turn a big three-bladed propeller for power, and used a boat rudder to steer. Other airship pioneers tried other ways of developing power, including electricity. However, none of these early airships worked very well until the lightweight gasoline engine was invented. The Brazilian Alberto Santos-Dumont flew a number of airships driven by gasoline engines in the early 1900s. Count von Zeppelin had four airships flying passengers between German cities by 1910. German zeppelins bombed London in World War I. However, British airplanes soon proved it was easy to shoot down the huge, slow airships. The Age of the Airship The high point in airship history came in 1929, when the German Graf Zeppelin flew around the world in 21 days. It had a crew of 40 and carried 20 passengers. The huge silver airship was 776 feet (237 m) long, and flew 80 miles an hour (129 km/hr). The Graf Zeppelin started its famous flight in Lakehurst, New Jersey. It landed only three times, first in Friedrichshafen, Germany, next in Tokyo, Japan. It then flew over the Pacific Ocean to Los Angeles, California. From there it returned to Lakehurst. The Graf Zeppelin flew safely for nine years, and carried a total of more than 18,000 passengers. Encouraged by the success of the Graf Zeppelin, the Germans built the Hindenburg. The Hindenburg was the largest rigid airship ever built--803 feet (245 m) long and twice as wide as the Graf Zeppelin. It carried 78 passengers and 19 crew members. It made ten successful round trips between Germany and the United States in 1936. But, on May 6, 1937, the hydrogen gas inside it exploded and the Hindenburg crashed as it was landing at Lakehurst. Of the 97 people on board, 36 were killed and the rest were badly injured. This tragedy ended the age of the airship. The British had lost their R-101 airship in 1930, and with the Hindenburg disaster Germany too abandoned lighter- than-air craft. Many accidents to European airships were caused by explosions of the hydrogen gas used to lift them. Hydrogen burns easily. U.S. airships used helium, a gas almost as light as hydrogen, but which will not burn. The U.S. has most of the world's helium supply. Germany had none and, therefore, had to use hydrogen. Between 1920 and 1935, the U.S. Navy built three huge dirigibles-- the Shenandoah, the Macon, and the Akron. The Macon and the Akron each carried five small airplanes that could take off and land from the airship in flight. All three airships eventually crashed: Shenandoah in 1925, Akron in 1932, Macon in 1935. They were not strong enough to fly in bad weather. One type of airship that worked successfully was the U.S. Navy blimp. Ten of these were used during World War II on antisubmarine patrols and to escort 80,000 U.S. ships across the ocean. Today, there is new interest in airships and finding better ways of building them. Airships move so slowly and calmly that they are useful for shooting television pictures from above for a bird's-eye view of important news events. In the future, airships could provide cheap transportation and also popular sight-seeing flights. The age of the airship could return.