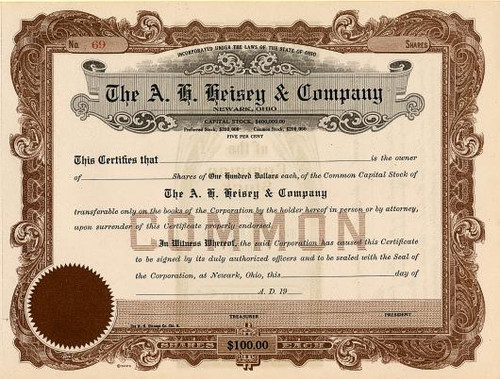 Beautifully engraved specimen certificate from A. H. Heisey dated 191X. This historic document has an ornate border around it with with the company's name in fancy scrip. This item is over 87 years old. 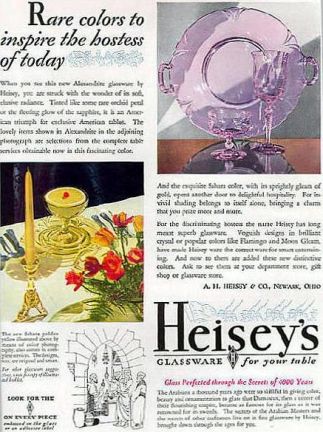 Old Ad shown for illustrative purposes
The A.H. Heisey Company manufactured world famous glassware in Newark, Ohio from 1896 until 1957. Its famous (Diamond H) trademark was known around the world. A. H. Heisey & Company was founded in 1895 and opened for business in Newark, Ohio in 1896. Known today for its high quality glass, Heisey owed its beauty to an excellent glass formula, high quality raw materials, and to the way it was finished, fire polishing and grinding and polishing the bottoms of most pieces. Some of the more well known and popular patterns made by Heisey are: Cabochon, Charter Oak, Chintz, Crystolite, Empress, Greek Key, Ipswich, Kalonyal, Lariat, Minuet, New Era, Octagon, Old Colony, Old Sandwich, Orchid, Plantation, Pleat & Panel, Provincial or Whirlpool, Queen Ann, Ridgeleigh, Rose, Saturn, Stanhope, Sunburst, Twist, Victorian, Waverly and Yeoman. There are several colors in Heisey glass that are considered relatively rare today including: Alexandrite, Cobalt, Dawn, Tangerine and Zircon (Limelight). Due to increasing foreign competion, when Heisey closed down its operations in 1957. Augustus H. Heisey (1842-1922) was born in Hanover, Germany. His family emigrated to the United States in 1843 and settled in Merrittown, Pennsylvania. Following his father's death and his mother's return to Germany, Augustus lived with his sister. After leaving school, he entered the printing business for a short time. He made a career change in 1861, becoming a glass clerk with the King Glass Company in Pittsburgh. The Civil War interrupted his career however, and he enlisted in the Army in 1862. He served with Company C of the 155th Regiment of Pennsylvania Volunteers and fought in several battles, including the Battle of Gettysburg for the capture of Little Round Top. In 1864, he was promoted to the rank of Captain. He left the Army the following year. Augustus then resumed his career in the glass industry, becoming first a shipping clerk and later a salesman for Ripley & Company of Pittsburgh. He was regarded as one of the best salesmen in the industry. In 1870, he married Susan N. Duncan, daughter of George Duncan, Sr., who soon became the sole owner of the Ripley Glass Company and renamed it Geo. Duncan & Sons. Augustus later became part owner of the Duncan Glass Company along with his wife and brother-in-law. In 1895, Augustus Heisey moved to Newark, Ohio and opened a glass factory there. The factory was in operation from 1896. Augustus died in 1922, and his sons E. Wilson and T. Clarence assumed control of the company. They ran the factory successfully until it ceased production in 1957. History from Wikipeida and OldCompanyResearch.com.