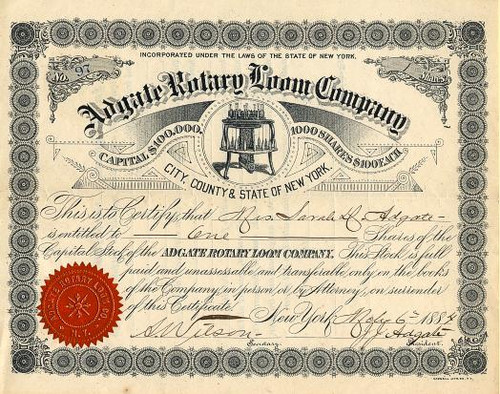 Beautiful certificate from the Adgate Rotary Loom Company issued in 1886. This historic document was printed by Cadwell Lith and Company and has an ornate border around it with a vignette of an orignal loom. This item has the signatures of the Company's President, Joseph J. Adgate and Secretary and is over 127 years old. 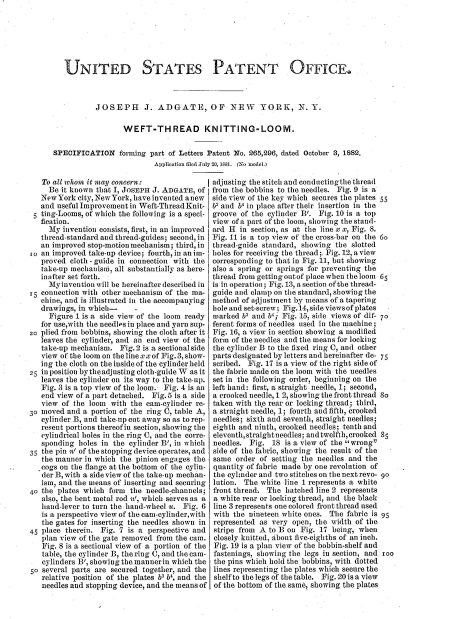 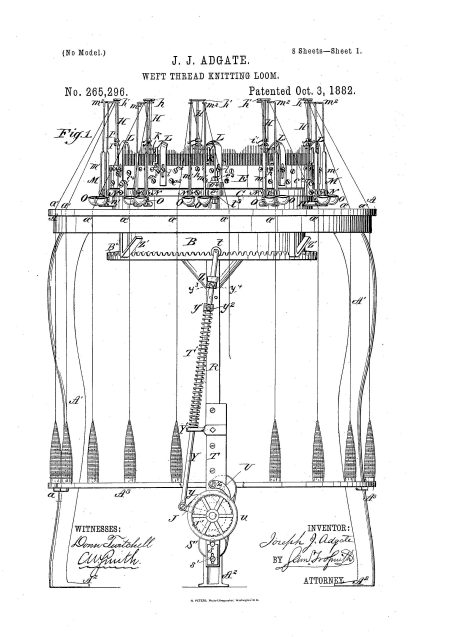 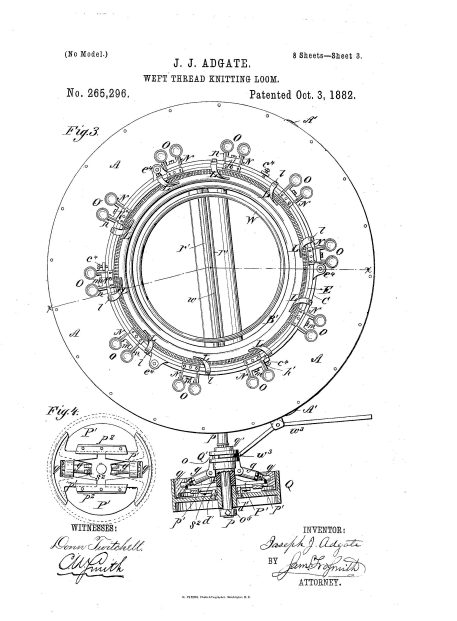 In general the supporting structure of the loom is called the frame. The frame provides the means of fixing the length-wise threads, called the warp, and keeping them under tension. When producing a long piece of material, the warp threads are wound on a roller called a beam, and attached to the cloth beam which will serve to hold the finished material. Because of the tension the warp threads are under, they need to be strong. The thread that is woven through the warp is called the weft. The weft is threaded through the warp using a shuttle, which carries the weft through separated warp threads. The original hand-loom was limited in width by the weaver's reach, because of the need to throw the shuttle from hand to hand. The invention of the flying shuttle with its fly cord and picking sticks enabled the weaver to pass the shuttle from a box at either side of the loom with one hand, and across a greater width. The invention of the drop box allowed a weaver to use multiple shuttles to carry different wefts. After passing a weft thread through the warp, a reed comb used to beat (compact) the woven weft. Rather than having to lift each thread individually, alternate threads can be separated by introducing a bar between the threads: the gap created is called the shed. While an inserted bar only presents one orientation, alternating sets of threads can be lifted by connecting them with string or wires called heddles to another bar, called the shaft (or heddle bar or heald). Heddles, shafts and the couper (lever to lift the assembly) are called the harness -- the harness provides for mechanical operation using foot- or hand-operated treadles. (Multiple harnesses can be used, connected to different sets of warp threads in a draw-loom.) Sleying is the process of threading the warp yarn through the reed. Usually one speaks of "sleying the reed". You set (verb) the warp at X ends per inch and then you can say that its sett (noun) is X ends per inch.