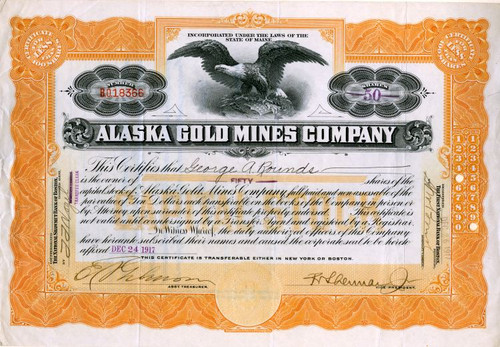 Beautifully engraved Certificate from the Alaska Gold Mines Company issued in 1917. This historic document was printed by the Republic Banknote Company and has an ornate border around it with a vignette of an eagle. This item is hand signed by the Company's President and Secretary and is over 100 years old. Condition is EF. Alaska Gold Mines Co was the sole controller of Alaska Gastineau MC, which began production in 1911. The Juneau gold belt is located in the southeastern portion of the U.S. state of Alaska. The mine properties were located within the Juneau Gold Belt near the Bastineau Channel at the mouth of Sheep Creek. The Juneau gold belt is located in the southeastern portion of the U.S. state of Alaska. The company operated through several shafts to depths of about 1500 feet, with many miles of tunnels. One of the directors, D. C. Jackling, was a famous mining engineer. The Mines Handbook (1925) states that the gold occurrence was very promising and resulted in mining of nearly 6,000 tons of ore a day for the next 10 years. In 1920, total tons to the mill was nearly 2.2 million. Unfortunately, the cost of production, at $0.82/ton, was considerably more than the resale value of $0.69/ton. The mine began shutting down operations and selling off mining equipment in 1921. Plans were made to alter the mill to produce wood pulp or some other product; whether this was successful is unclear. In addition to the mine proper, Alaska Gold Mines Co owned several hydroelectric power plants that supplied power to Juneau, the income of which covered all expenses. Mines Handbook - 1931 The Alaska Gold Mines Company comprised of mineral lands in the Sheep and Gold Creek basins. There was a mill at the mouth of Sheep Creek, or Thane, and a reservoir and water power plant on Salmon Creek. All of the mining was done by this company was on the Perseverance Mine which has been developed to furnish the mill at Sheep Creek with ore. The mill has a daily capacity of 8,000 tons. The caving system of mining was used. All of the drifts were driven in the foot wall and raises run, keeping well in under the foot wall. Holes were drilled into the lode from these raises and the ore shot off the foot wall and allowed to cave from the hanging wall. A vertical three compartment shaft, 1544 feet in depth the collar of which has an altitude 'of 2300 feet above sea' level, was used to hoist men and material to 'the different levels. The bottom the shaft connected with an 8 by 10 adit, having: a length of 10,000 feet and a tram 1 l-4 miles long.