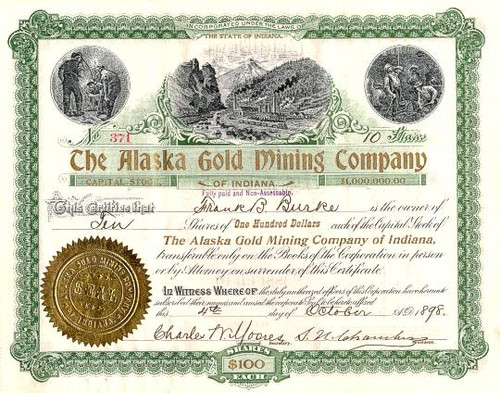 Beautifully engraved certificate from the Alaska Gold Mining Company issued in 1898. The company was incorporated in the state of Indiana. This historic document has an ornate border around it with a vignette of mill next to a stream with smaller vignettes of miners underground. Gilded print on company's name with an embossed gold seal. This item has the signatures of the Company's President (S. N. Chambers) and Secretary (Charles W. Moores). The certificate was issued to Frank B. Burke. This company was incorporated during the Alaska Gold Rush in 1898. According to the Department of the Interior Report printed in 1900 from the Governors of Territories, the Alaska Gold Mining Company of Indiana was near Berners Bay, and 6 miles from tide water, the company had just completed a 10-stamp mill, which will soon be in operation. It is provided with water power that is effective ten months of the vear