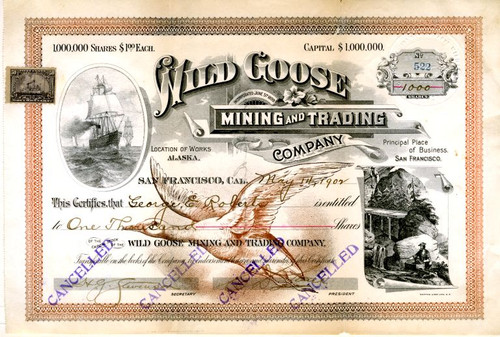 Beautiful certificate from the Wild Goose Mining and Trading Company issued in 1902. This historic document has an ornate border around it with a vignette of a ship, miners and an underprint of a flying wild goose. This item has the signatures of the Company's President, Charles D. Lane and Secretary. Stamped cancelled. 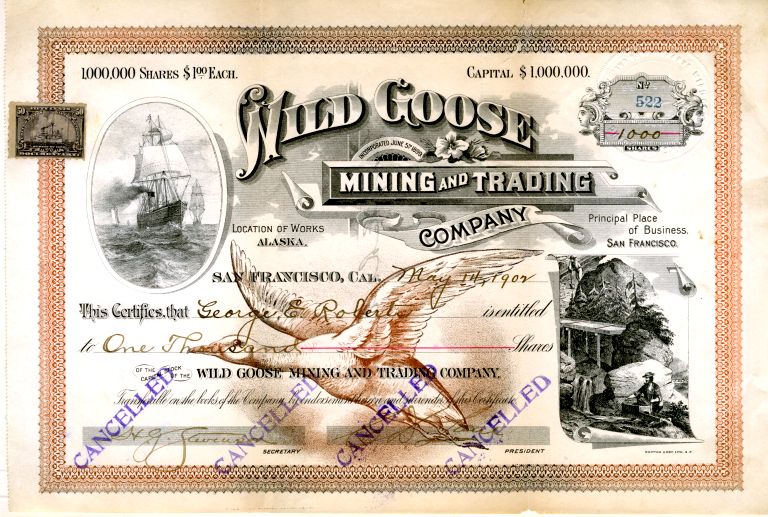 Charles D. Lane (November 15, 1840 - 1911) was a US millionaire mine owner, who is recognized as a founder of Nome, Alaska. Lane was born in Palmyra, Missouri in 1840. He died in 1911. He headed the Wild Goose Mining & Trading Co. In the summer of 1898, gold was discovered on Anvil Creek. News of the discovery reached the outside world that winter. By 1899, Nome had a population of 10,000 and the area was organized as the Nome mining district. In that year, gold was found in the beach sands for dozens of miles along the coast at Nome, which spurred the stampede to new heights. Thousands more people poured into Nome during the spring of 1900 aboard steamships from the ports of Seattle and San Francisco. By 1900, a tent city on the beaches and on the treeless coast reached 48 km (30 mi), from Cape Rodney to Cape Nome. Many late-comers were jealous of the original discoverers, and tried to "jump" the original claims by filing mining claims covering the same ground. The federal judge for the area ruled the original claims valid, but some of the claim jumpers agreed to share their invalid claims with influential Washington politicians. During the period from 1900−1909, estimates of Nome's population reached as high as 20,000. The highest recorded population of Nome, in the 1900 United States census, was 12,488. At this time, Nome was the largest city in the Alaska Territory. Early in this period, the U.S. Army policed the area, and expelled any inhabitant each autumn who did not have shelter (or the resources to pay for shelter) for the harsh winter. By 1910 Nome's population had fallen to 2,600. Charles D. Lane, an experienced mining entrepreneur who had become wealthy from mining enterprises in the Lower 48, paid a sizeable price to buy into the gold rush. He arrived in Nome in 1899 and established the Wild Goose Mining and Trading Company with a capitalization of over $1 million. A prominent Nome resident, he was president of the Company which had rich operations in the Anvil Creek area, and he was instrumental in building and operating the regions first railroad. Charles D. Lane and his family continued to play a central role in developments on the Seward Peninsula for the next several years, and the Wild Goose Mining and Trading Company became one of, if not the largest mining company in the area. In 1905 Charles Lane sold most of his holdings in the Wild Goose Mining and Trading Company, because of dissatisfaction with his partners, although he apparently retained a cordial feeling toward the company (Nome News 1905). History from Encyberpedia, BLM and OldCompany.com (old stock certificate research service)