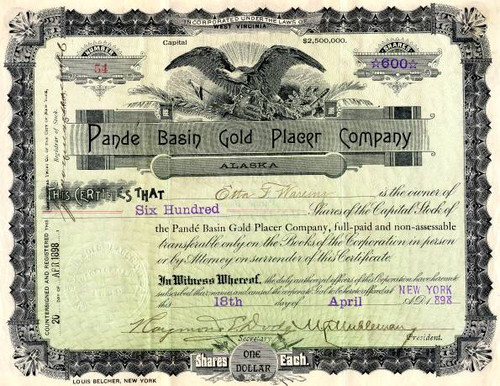 Beautifully engraved certificate from the Pande Basin Gold Placer Company issued in 1898. This historic document was printed by Louis Belcher and has an ornate border around it with a vignette of an eagle. This item has the hand signed signatures of the Company's President, Maurice L. Muhleman and Secretary, Raymond E. Dodge and is over 113 years old.

Certificate Vignette
Maurice L. Muhleman was also a Deputy United States Assistant Treasurer and cashier of the local Sub-Treasury. Pande Basin Gold Placer Company was organized, under the laws of West Virginia, for "the purpose of acquiring and holding by purchase, lease or otherwise, mineral land and other real property on Baranoff Island, Alaska, and elsewhere in the United States and territories." In April, 1898, Maurice L. Muhleman, who had gained control of the property which it is now proposed to lease, entered into a negotiation with the company by which, in consideration of the issue to him of 2,499,900 shares of stock of the company, at the making of a certain agreement with the original owners of the property, he undertook to furnish capital for the development of the mines, and to give a deed of the said property to the company. This proposition was accepted. Mr. Muhleman raised some money, and made certain tests of the ore, etc., of the property. The Pande Basin is situated on Baranof Island, about 10 miles east of the town of Sitka. The area of the basin is about 160 acres, being about 1 mile long by a quarter of a mile in width. A company under the name of the Pande Basin Gold Placer Company has been formed in the city of New York, and is now busily engaged in opening up this basin. A 6 foot wagon road has just been completed, at a cost of $17,000, and 40 men are now employed on development work, such as sinking shafts and driving a tunnel, by which it is proposed to lower a lake (which is part of the basin) about 60 feet. The cost of tapping this lake is about $15,000. A small prospecting mill has also been erected and a thorough test will be made during the coming winter. Assays of the auriferous saud and samples of surrounding quartz ledges have averaged $40 a ton, while single specimens have assayed as high as $900 to the ton. It is estimated that there are 40,000,000 tons of sand in the basin, and the ledges have been traced 1,500 feet, at an average width of 6 feet. Gen. Henry I. Willey, of California, is the mining engineer who is planning and conducting these operations. A large number of claims have been located in this district and are held by doing the annual assessment work. It is an inviting field for intending investors and promoters to examine with care. The sum total of effort in quartz mining has been very great this year, and many works have been started which have all the promise of maturity into steady bullion producers.