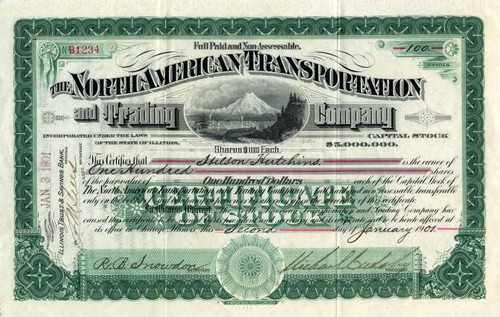 Beautiful certificate from the North American Transportation and Trading Company issued in 1907. This historic document was printed by the Western Banknote Company and has an ornate border around it with a vignette of an train passing around a mountain lake with a serene view of boats and a white mountain off in the distance. This item has the signatures of the Company's President, Michael Cudahy and Secretary, and is over 112 years old.

Certificate Vignette
In early August of 1897, the North American Transportation and Trading Company ordered a fleet of 15 ships to provide transportation to the gold strikes in western Alaska at the turn of the nineteenth century -- which required ocean-going vessels that could sail the Bering Sea -- further stimulated the shipbuilding industry in Seattle. The Klondike stampede boosted Seattle's shipping to the Far North considerably. According to a newspaper report, Seattle's fleet tripled in size between 1897 and 1898, in part due to the "Alaskan business." So pressing was the demand for steamships in the late 1890s that some vessels of marginal quality were placed in service. Seattle's shipping "never was so entirely engaged," explained one reporter in 1897. "Not a single vessel seaworthy and capable of use" was overlooked. Michael Cudahy (18411910) was an American industrialist. He was born in Callan, County Kilkenny Ireland in 1841 and emigrated to the United States in 1849. He moved with his family to Milwaukee, Wisconsin and worked in the meat packing industry. With the help of his brothers Edward and Patrick Cudahy, he established the Cudahy Meatpacking plant in South Omaha, Nebraska. In 1908 Cudahy sold his share of the company and bought a 2,800 acre (11 km²) ranch east of Los Angeles. He subdivided the ranch and sold it as one acre (4,000 m²) lots. This area was incorporated in 1960 as the City of Cudahy, California. Although it was Gustavus F. Swift who pioneered in the development of refrigeration in transportation with the refrigerated car, it was Cudahy and Armour who made the greatest developments in using refrigeration on the production side of the meat packing business. Before it had been largely a winter business, but the process of refrigeration revolutionized the industry so that it could be carried on continuously throughout the year. Cudahy's part was that of a captain of industry who understand the significance of a new scientific development and made possible its application to commerce. In 1887, Philip D. Armour, Michael Cudahy, and his brother, Edward A. Cudahy, purchased a small packing plant in South Omaha, Nebraska, and began a new business there called Armour-Cudahy Packing Company. In 1890 Michael Cudahy sold his interests in the Chicago Armour business to Armour and Company, and in turn, purchased Armour's interest in Armour-Cudahy, which was renamed Cudahy Packing Company. He remained president until he died in 1910. Stilson Hutchins (1838 - 1912) was an American newspaper reporter and publisher, best known as founder of the Washington Post. Hutchins was born in Whitefield, Coos County, New Hampshire, on 14 November 1838, the son of Stilson Eastman and Clara Eaton Hutchins. He moved to Saint Louis, establishing the Saint Louis Times newspaper in 1866, and became a Missouri state representative for the Democratic Party. He subsequently moved to Washington, D.C., where he founded the Washington Post to advance Democratic Party views. It was first published on December 6, 1877; within a year, circulation topped 6,000 copies per day. In 1880, Joseph Pulitzer joined the staff. By 1888, Hutchins cut his allegiance to the Democrats, and bought out the paper's only competitor, the Republican National. He sold the Post in 1889. In 1889, Hutchins commissioned a statue of Benjamin Franklin to stand at the corner of Pennsylvania Avenue and 12th street, overlooking what were then the offices of the Washington Post. In 1890, he commissioned a sculpture of Charles Dickens from Francis Edwin Elwell, but backed out of the deal. In 1900, Hutchins also funded Gaetano Trentanove's Daniel Webster Memorial in Scott Circle, Washington, D.C. In August 1883, Hutchins had leased Governor's Island, on Lake Winnipesaukee in Gilford, New Hampshire, from Isaiah Morrill of Gilford, for $1,000 per year for 99 years, "with the privilege of purchasing the island within twenty years for the sum of $20,000". The arrangement took effect January 1, 1884. Hutchins built a mansion on the island in 1885.[citation needed] In 1903, he leased the mansion to the Ambassador from Germany, Baron Speck von Sternburg, who established a summer embassy there with a retinue of at least 20 persons. The Baron later wrote that the view from the mansion was as magnificent as anything in Switzerland or Bavaria, and that the advertising which he gave the region caused the sale of other summer property. The mansion was sold by the Hutchins family in the late 1920s and burned down on August 1, 1935. While Hutchins' mansion was once the only one on the island, now there are scores of large private homes. He died at his home in Washington, D.C., on 23 April 1912 and is buried at Rock Creek Cemetery. History from Wikipedia and OldCompany.com (old stock certificate research service)