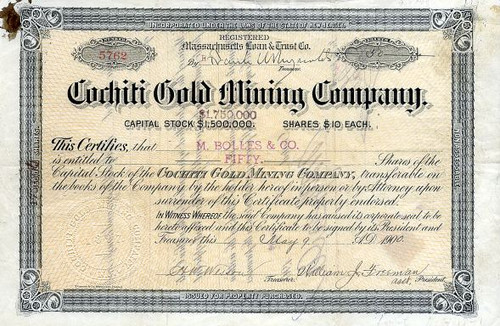 Beautiful certificate from the Cochiti Gold Mining Company issued in 1900. This historic document has an ornate border around it. This item is hand signed by the Company's Assistant President (William J. Freeman) and Secretary (H. W. Wesson) and is over 100 years old. Ink spot in upper left corner.

New Mexico, COCHITI DISTRICT: was prospected in the 1870's or 1880's, but boundary disputes with Mexico dampened any early enthusiasm to locate claims. By 1889 much exploration was underway, resulting in the discovery of the Albemarle deposit in 1894. During a period of feverish activity from 1894 through 1904 more than $1 million in gold and silver was mined. In 1905 mining ceased and was never resumed except for brief flurries in 1914-16 and 1932-40 The district was mostly idle from 1941 through 1959. The total gold production through 1959 was about 41,500 ounces. The Cochiti Pueblo Indian Reservation is an irregularly shaped area wholly within Sandoval County, about 35 miles northeast of Albuquerque, New Mexico. The reservation boundary encom-passes 28,779 acres, of which all but 3 acres are tribally owned.