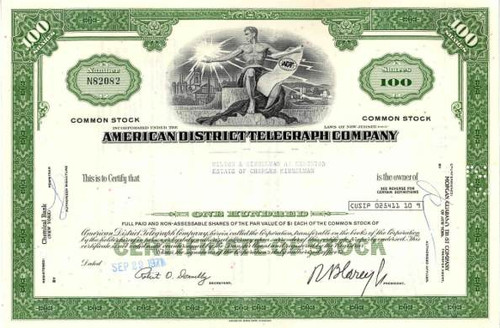 Beautifully engraved certificate from the American District Telegraph Company issued in 1972 or earlier. This historic document was printed by the American Banknote Company and has an ornate border around it with a vignette of an allegorical man with the company logo holding a bolt of lightning. This item has the printed signatures of the Company's President and Secretary.

Certificate Vignette
Celebrating its 129th anniversary, ADT Security Services, Inc., a unit of Tyco Fire & Security, is the largest single provider of electronic security services to more than five million commercial, government and residential customers throughout the United States. ADT's total security solutions include intrusion, fire protection, closed circuit television, access control, critical condition monitoring, electronic article surveillance and integrated systems. 1874 In 1874, 57 diverse "district" telegraph delivery companies were joined to create the new American District Telegraph Company - the forerunner of today's ADT. With the advent of advanced Call Boxes and multi-signal electric protection system in the early 1890s, ADT became a pre-eminent security protection company. The multi-signal Call Boxes allowed watchmen at businesses to do more than just signal for police or fire department assistance - now he could also send a specific signal to the ADT office, at designated times, to let the monitoring office know that all was well. If a district office didn't receive its scheduled signal, something was assumed amiss, and help was dispatched. By 1899, electric signal services were still only available in 50 towns, though messenger services were widespread throughout more than 500 localities. In 1901, ADT was incorporated as a subsidiary of Western Union. Still, since each of ADT's 57 district companies had developed independently, the many offices of the security company operated at a variety of levels, with different systems, equipment, and operating practices. In 1909, Western Union (and ADT) came under the control of AT&T, whose company policies and organization changed the ADT organization. In 1910, AT&T President Theodore N. Vail took the reins at AT&T, and as a result, ADT concentrated fully on the signal business. In 1969 it became a publicly owned company with its stock listed on the New York Stock Exchange. In 1987, ADT was purchased by the Hawley Group, Ltd., and renamed ADT Security Systems, Inc. The U.S. headquarters were relocated from New York City to Parsippany, N.J. In early 1998, ADT, Ltd. was acquired by Tyco International Ltd. Today, ADT has residential and commercial coverage in about 230 major U.S. markets.