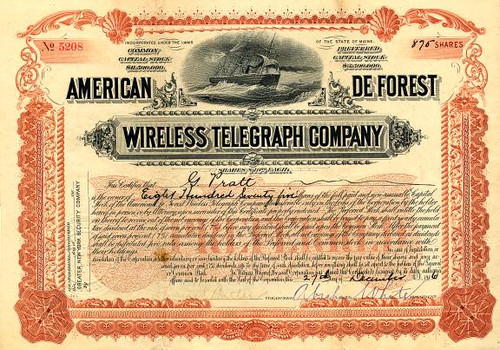 Beautiful certificate from the American DeForest Wireless Telegraph Company issued in 1906. This historic document was printed by the New York Banknote Company and has an ornate border around it with a vignette of an ship on a turbulent ocean. This item has the signatures of the Company's President and Treasurer, and is over 115 years old. 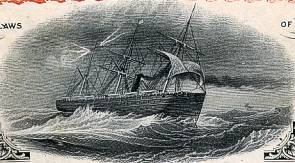 Certificate Vignette
Lee De Forest invented the device that made wireless radio broadcasting practicable: the "triode" or "audion" amplifier. At Yale University, De Forest helped pay his tuition with his mechanical and gaming inventions. He narrowed his focus to radio when he began working on his Ph.D, which he received in 1899. In his research, De Forest began to conceive of an improvement to the "diode" vacuum tubes being used at the time. Those diode tubes maintained an electromagnetic current between two electrodes, an anode (positive) ansd a cathode (negative). They were not subtle enough to respond to changes in incident electromagnetic radiation; and they could "rectify" signals (from AC to DC), but not amplify them. By 1906, De Forest had found a simple but ingenious solution to these problems: he added a third electrode between the other two. De Forest's patented "triode" or "audion" tube could both rectify and amplify; and its greater control it meant that various electronic circuits would finally be commercially feasible. De Forest, who had first predicted the possibility of radio broadcasting in 1902, now founded a company (1907), in order to make commercial radio a reality. However, despite successful public demonstrations by De Forest and some other scientists, the public was skeptical. In fact, the US District Attorney sued De Forest (in 1913) for defrauding his shareholders with what it called "absurd" promises. But De Forest persevered, and in 1916 had two triumphs: the first radio advertisement (for his own products) and the first presidential election reported by radio. De Forest's achievements go even farther than his nickname,the "Father of Radio," implies. By the end of his career, he had earned over 300 patents. His audion tube became an essential component of not only commercial radio, but the telephone, television, radar, and computer. Although solid-state transistors replaced the bulky audion tubes originally used in these devices long ago, Lee De Forest's inventions and enthusiasm paved the way for the electronic age Lee de Forest's father was a minister and hoped that his son would follow in his footsteps. In order to be trained for this calling, de Forest left Alabama for prep school in Massachusetts. His life at school was hard, with chores as well as academics, plus work to supplement his scholarship. Besides, he was not well-liked there. Biographers report he was extremely concerned with getting recognition from his peers, an issue which lasted throughout his life. Alas, he only won acknowledgement as "homeliest boy in school." Despite this, he was confident. During school, de Forest had tried to get money (and fame) by inventing things he might sell or enter in contests, but none were great successes. After receiving a PhD from Yale in 1896 with a dissertation on radio waves, he developed an improved wireless telegraph receiver. By 1902, he had founded the De Forest Wireless Telegraph Company but like other firms he would start, it failed because of poor business practices. De Forest was extremely creative and energetic, but often was unable to see the potential of his inventions or grasp their theoretical implications. While working on improving wireless telegraph equipment, he modified the work of other inventors and created the Audion, a vacuum tube containing some gas. It was a triode, incorporating a filament and a plate, like ordinary vacuum tubes, but also a grid between the filament and plate. This strengthened the current through the tube, amplifying weak telegraph and even radio signals. De Forest thought the gas was a necessary part of the system. In 1912, others showed that a triode in a complete vacuum would work far better. This kind of "nearly getting it" would characterize de Forest's life. In 1912, he developed a feedback circuit, which would increase the output of a radio transmitter and produce alternating current. He didn't see the worth of his discovery, though, and by the time he applied for a patent in 1915, it had already been patented by E. Howard Armstrong. De Forest sued, with legal action lasting until 1934. He won, but the radio industry always credited Armstrong with the invention. His other major contribution was to the film industry. In the 1920s, he had been trying to use electricity to improve sound recordings. He found a way to record sound on film, again adapting the work of others and using his Audion. This led directly to the creation of motion pictures with sound. He achieved this in 1921 and tried to push his technology to the film industry. They resisted, but when they were finally won over, used a different method. The De Forest Phonofilm Corporation folded by 1925. Two years later The Jazz Singer appeared in theaters, the first feature-length "talkie." Ironically, the industry later reverted to the sound method De Forest first proposed. Throughout his tumultuous life -- many failed businesses, ongoing lawsuits, patent applications, and four marriages -- de Forest promoted radio and later television as a way to raise Americans' cultural awareness. In 1910, he attempted the first live broadcast from New York's Metropolitan Opera House (starring Enrico Caruso). In 1916, he pioneered radio news, broadcasting -- although incorrectly -- the results of the presidential election. He was disappointed with how radio and television evolved, however, and was deeply critical of its low standards. De Forest wrote an autobiography entitled Father of Radio, but did not get that recognition from the rest of the world. He is remembered as one contributor to an industry that was, in truth, the work of many people.