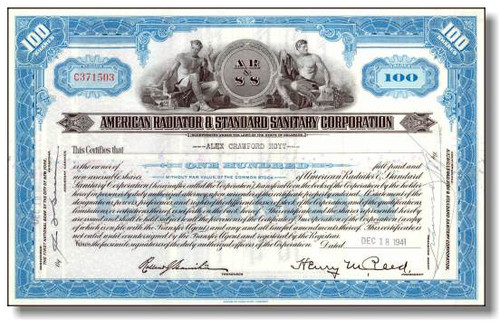 Beautifully engraved Certificate from the famous American Radiator and Standard Sanitary Company issued no later than 1950. This historic document was printed by the American Banknote Company and has an ornate border around it with a vignette of two allegorical men flanking the company's logo. This item has the printed signatures of the company's officers and is over 53 years old. Name changed to American Standard in 1967.

Certificate Vignette
American Standard was created from the 1929 merger of the American Radiator Company and the Standard Sanitary Manufacturing Company. Through these companies and others, American Standard traces its lineage to several pioneering businesses established during the Industrial Revolution of the late 19th and early 20th centuries. Since its founding, American Standard has acquired and divested several businesses. Two acquisitions have been developed, however, into core businesses for the Company. · In 1968, American Standard acquired Westinghouse Air Brake Company (WABCO), a manufacturer of railway and commercial vehicle braking systems. This acquisition came to form what is now the Company's Automotive Products division. · The Trane Company, a manufacturer of heating, ventilation, air conditioning equipment and building comfort management systems, was acquired by American Standard in 1984. With this acquisition, the Company gained its Air Conditioning Products division. In 1988, American Standard was the target of a hostile takeover bid by the Black & Decker Company. A management led buyout resulted in American Standard becoming a privately-held corporation. To finance the buyout, American Standard divested several businesses including the railway braking portion of its then Transportation Products division.. American Standard reemerged as a publicly-traded company in February 1995. In Jauary 1997, the Company announced the formation of a Medical Systems Group. American Radiator Building Location: 40 West 40th Street between Fifth and Sixth Avenues, New, York, New York, USA Architect: Raymond Hood, Hood & Fouilhoux Date Completed: 1924 Raymond Hood established himself as one of the foremost architects in the United States with this building, his first major commission in New York City. In 1923, the American Radiator and Standard Sanitary Company, impressed by Raymond Hood's radiator cover designs, commissioned Hood to design an office building and showroom on a small plot overlooking Bryant Park. Hood set an eighteen story tower atop a four story base that matched its neighbors in height. The base, with its tight covering of black granite and large show windows, is an impressive street-level entity, yet it does not detract in the least from the towering bulk of the building. The main shaft of the building is clear and simple. Hood used "courts" at the sides of the tower, and chamfered corners to insure that the building would always maintain an individual identity on the street no matter what might be built adjacent to it in the future. Every aspect of the building was meant to convey the high quality of the American Radiator Company's products. The black brick of the tower is especially effective in giving the building a dignified and unified look. The relatively small amount of "crown" detailing and the skillful and restrained use of guilded terra-cotta ornament added to the sense of attention to small detail.