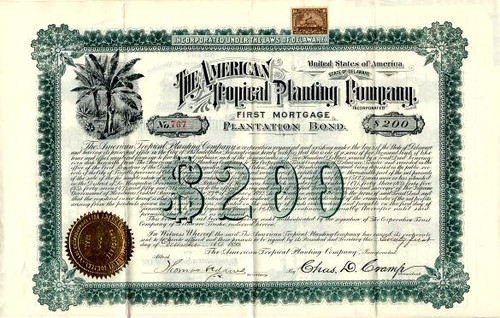 Beautifully engraved certificate from the American Tropical Planting Company issued in 1899. This historic document and has an ornate border around it with a vignette of a man picking bananas off a tree. Gold Corporate Seal. This item has the signatures of the Company's President, Chas. D. Cramp and Secretary, Thomas Adams and is over 109 years old. Over 20 coupons attached on bottom. Would look terrific framed.

Certificate Vignette
The American Tropical Planting Company owned 5123 acres of land in the City of Trujillo, La Mosquitia District, Province of Colon, Honduras. Trujillo is a city and a municipality on the northern Caribbean coast of the Honduran department of ColÃ³n, of which the city is the capital. The municipality has a population of about 30,000 (2003). The city is located on a bluff overlooking the Bay of Trujillo. Behind the city rise two prominent mountains, Mount Capiro and Mount Calentura. Three Garifuna fishing villages--Santa Fe, San Antonio, and Guadelupe--are located along the beach. Christopher Columbus landed in Trujillo on August 14, 1502, during his fourth and final voyage to the Americas. Columbus named the place "Punta de Caxinas". It was the first time he touched the Central American mainland. He noticed that the water in this part of the Caribbean was very deep and therefore called the area Golfo de Honduras, i.e., The Gulf of the Depths (see: Bay of Honduras). The history of the modern town begins in 1524, shortly after the conquest of Mexico by HernÃ¡n CortÃ©s. CortÃ©s sent CristÃ³bal de Olid to found a Spanish outpost in the region, and he established a town named Triunfo de la Cruz in the vicinity. When Olid began using the town as his base for establishing his own realm in Central America, CortÃ©s sent Francisco de las Casas to remove him. Las Casas lost most of his fleet in a storm, but he was nevertheless able to defeat Olid and restore the region to CortÃ©s. Upon assuming control, Las Casas decided to relocate the town to its present location, because the natural harbor was larger. At the same time, Triunfo de la Cruz was renamed Trujillo. His deputy, Juan Lopez de Aguirre was charged with establishing the new town, but he sailed off, leaving another deputy, named Medina, to found the town. CortÃ©s himself visited the town shortly after, during a campaign to suppress the internecine fighting between his followers. It was he who sent ships to established Spanish colonies in Jamaica and Cuba for saplings, seed, and domesticated animals that could be raised there. In the coming years, however, Trujillo became more important as a shipment point for gold and silver mined in the interior of the country. Because of its sparse population, the city also became a frequent target of pirates. Under Spanish rule Trujillo became the capital of Honduras, but because of its vulerability the capital was changed to the inland town of Comayagua. The fortress, Fortaleza de Santa BÃ¡rbara (El Castillo), which sits on the bluff overlooking the bay, was built by the Spanish around 1550. Nevertheless, it was inadequate to really defend Trujillo from pirates--the largest gathering of pirates in history took place in the vicinity in 1683--or rival colonial powers: the Dutch, French, and English. The town was destroyed several times between 1633 and 1797, and during the eighteenth century, the Spanish all but abandoned Trujillo because it was deemed indefensible. When Honduras obtained its independence in 1821, Trujillo lost its status of capital city permanently first to Comayagua, which lost it to Tegucigalpa in 1880. From this same period onwards Trujillo also began to prosper again. In 1860, the mercenary William Walker, who had seized control of neighboring Nicaragua, was finally caught and executed in Trujillo. His tomb is a local tourist attraction. American author O. Henry (William Sydney Porter) spent about a year living in Honduras, primarily in Trujillo. He later wrote a number of short stories that took place in "Coralio" in the fictional Central American country of "Anchuria", based on the real town of Trujillo. Most of these stories appear in his book Of Cabbages and Kings. History from Wikipedia and OldCompanyResearch.com (old stock certificate research service).