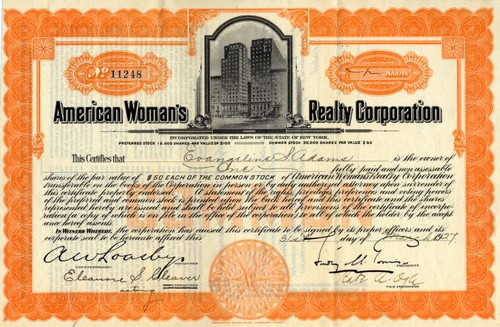 Beautiful certificate from the American Woman's Realty Corporation issued in 1927. This historic document was printed by the American Banknote Company and has an ornate border around it with a vignette of the Henry Hudson Hotel. This item has the hand signatures of the Company's President, Vice President and Treasurer, and is over 87 years old.

Certificate
The American Woman's Association (AWA) came into being in 1922 succeeding its predecessor organization, the Vacation Association (which was also called the Working Girls Vacation Association), a group that helped working women save money for vacations. The AWA provided social, recreational, and educational activities for its members. It operated a number of clubhouses in Manhattan which provided living quarters for some members. The most renowned of these would later be known as the Henry Hudson Hotel on W. 57th St. This was built and operated by the American Woman's Realty Corporation, an independent subsidiary of the American Woman's Association. In 1942, the AWA sold the Henry Hudson Hotel and leased the Barclay Hotel on E. 48th St. By the 1960's the organization was in decline. In 1974, operating as a foundation, the AWA disposed of its remaining assets. From the description of American Woman's Association records, 1911-1974. (Columbia University In the City of New York). WorldCat record id: 56773387 OldCompany.com - Old Stock Research Service