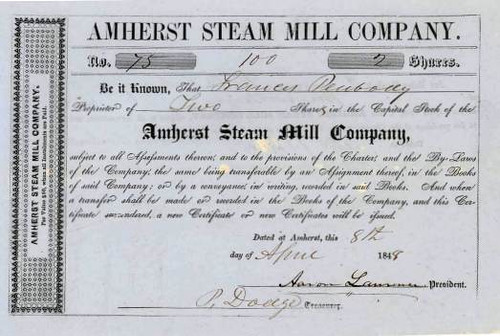 Beautifully engraved certificate from the Amherst Steam Mill Company issued in 1848. This historic document has an ornate border around it. This item is hand signed by the Company's President ( Aaron Lawrence )and Treasurer and is over 154 years old. The certificate was issued to Francis Peabody and signed by him on the verso. The Amherst Steam Mill Company was incorporated in July, 1846, with Samuel B. Melendy, Cyrus Eastman and Francis Peabody the first executives named. Aaron Lawrence became the president of the board of directors. Several buildings were erected. A sawmill began operating in February, 1847, a grist mill on May 1, and a clapboard and a shingle mill shortly thereafter. A fifty horse-power steam engine powered the mills. Notices appearing in the Farmer's Cabinet, published in Amherst, called people to meetings, notified stockholders when assessments were due on their shares, advertised for workers, and finally in the summer of 1848, advertised the mills for sale. The buildings burned March 25, 1849.