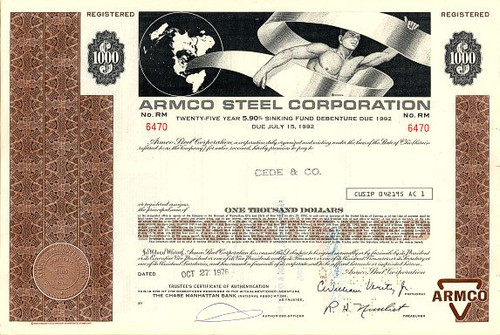 Beautiful certificate from the Armco Steel Corporation issued in 1976. This historic document was printed by Security-Columbian Banknote Company and has an ornate border around it with a vignette of a man holding a ribbon and a globe. This item has the signatures of the Company's President and Treasurer and is over 32 years old.

Certificate Vignette
The company changed their name from Armco Steel Corporation to Armco Inc shortly after these certificates were issued in 1978. In 1999, the company merged with AK Steel. Pittsburgh-based Armco Inc. was a leading domestic producer of specialty flat-rolled stainless, electrical and galvanized steels with plants in Butler, Pennsylvania, and Coshocton, Dover, Mansfield and Zanesville, Ohio. Armco also produced snowplows and ice control products and standard pipe and tubular products. AK Steel has its headquarters and operates its largest carbon steel plant in Middletown, Ohio, in the Eighth Congressional District. The company produced its first heat of steel in Middletown on February 7, 1901. In 2000 the company's Middletown Works established new safety, quality and productivity records in several departments. The Middletown coke plant employees worked injury-free in 2000, becoming the first traditional (recovery) coke battery in the U.S. to achieve such a milestone. The plant's cold rolling mill employees broke their own world record by producing 3.4 million tons, or more than 191,000 miles of sheet steel in 2000. AK Steel earned $52 of operating profit per ton in 2000, leading the U.S. industry in this key measure for the seventh consecutive year. History from OldCompany.com.