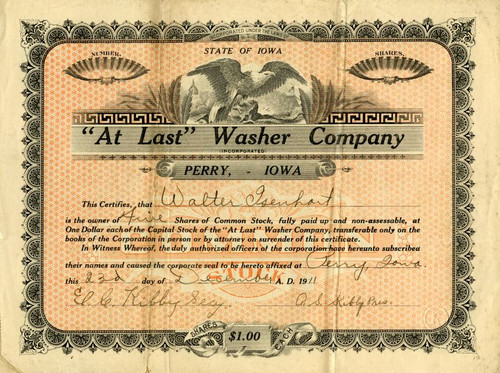 Beautifully engraved certificate from the At Last Washer Company issued in 1911. This historic document has an ornate border around it with a vignette of an eagle. This item has the hand signatures of the Company's President, Albert S. Kirby and Secretary, Ernest Kirby. Folded in thirds. Toning and some wear. 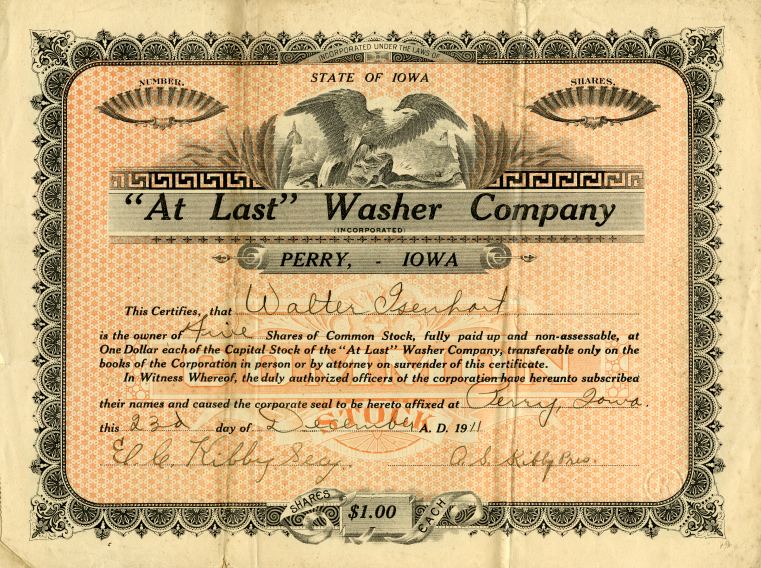 Certificate
Progressive Foundry, originally a supplier of cast iron washing machine parts, was started in the 1920's by Richard Tietjen. It all began in the basement of the At Last Washing Machine Factory where it continued until 1934 when the washing machine factory closed. ALBERT S. KIBBY Birth: Jan. 29, 1877 Death: Dec. 26, 1929 Albert S. Kibby, former city official of Perry, Iowa and for many years prominently associated with the manufacturing and industrial like of the city, died at his home, 1923 North Second street his morning at 5:20 a.m., following an illness which has lasted since late summer. The cause of death was a cancer of the stomach, which defied all attempts both medical and surgical to bring relief. Mr. Kibby was a member of the city council at two different periods. The mayor and the council attended the service in a body paying tribute thus to one who once shared the same public responsibilities. The church was filled with relatives and friends. The many beautiful floral tributes were a testimony of the high esteem in which Mr. Kibby was held. NOTES: Audubon Elementary 1883-1893. Audubon High School 1894-1896; Iowa State College, Ames, Iowa 1901-1903 specialized in mechanical engineering. Ran Milk route & owned property in Audubon. Granted US Patents for: Washing machine gearing March 19, 1912 Washing machine October 2, 1928. Invented one of the first electric washing machines. Machinist, Northwestern railway shops, Boone, Iowa, 1903. Warehouse pulley man for F.M. Davis, Denver, Co (1903-1904) Supt. Watkins Mfg. Co (bed springs) Ames, IA (1904-1907) Mgr. of Globe Manufacturing Co. Perry, IA (1907-1909); Pres. At Last Washer Co., Perry, Iowa (1910-1929. Albert with brother Ernest began At Last Washer Company in 1910. Applied & was commissioned as 2nd Lieutenant in Ordinance Dept. by the War Department September 18, 1918 at the age of 41. History from Wikipedia and OldCompany.com (old stock certificate research service)