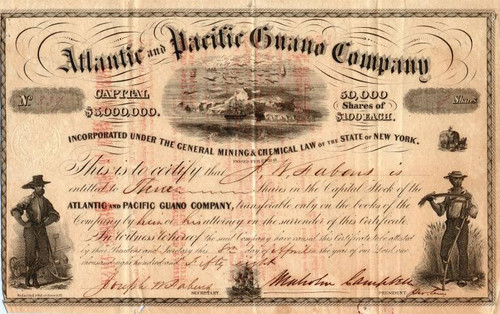 Beautiful RARE certificate from the Atlantic and Pacific Guano Company issued in 1858. This historic document has an ornate border around it with a vignettes of a ship in front of the Swan Islands with birds flying overhead, a miner and a farmer. This item has the signatures of the Company's President, Malcolm Campbell and Secretary, Joseph W. Fabens. Light folds, minor holes on bottom border, light toning. The certificate was issued to Joseph W. Fabens. 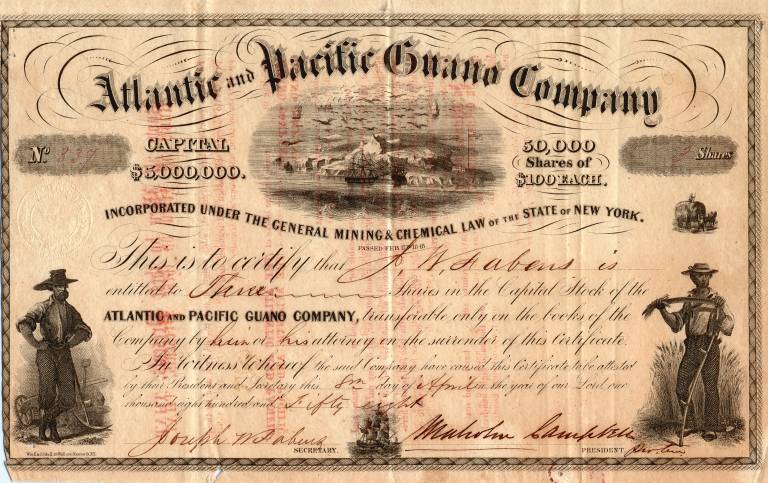 Certificate
The Swan Islands, a possesion of Honduras, are positioned 97 mi (156 km) north of Honduras in the Caribbean Sea, latitude 17 degrees North and longitude 83 degress West. The Swan Islands consist of 3 islands, Great Swan, Little Swan, and Booby Cay. The islands are about 3 sq mi (8 sq km) in area. Great Swan is almost two miles in length Little Swan is about 1.5 miles in length by 0.3 miles wide. Booby Cay, is a only about 100 yards long. Discovered by Christopher Columbus in 1502, the islands were christened Islas de las Pozas. The islands were later renamed in the 18th century after Captain Swan, who was believed to have been one of the pirates who dominated the area. As a result of the Guano Islands Act, the Swan Islands were claimed in April of 1857 by John Valentine White. White filed his claim with the U.S. State Department, reporting the existence of guano. Later in 1857, White conveyed all rights, title, and interest in the islands to Charles Sterns, Joseph W. Fabens, and Duff Green, who later incorporated under the name Atlantic and Pacific Guano Co. In 1904, Alonzo Adams claims Swan Islands, after a chemical company which had bought the islands became insolvent. In 1908, the rights are conveyed by Adams to the Swan Is. Commercial Co. In 1914, Great Swan became an official U.S. weather station. In 1923, Honduras puts forward a claim to the islands with the argument that since the islands were discovered by Columbus, they should be owned by the nearest Spanish-speaking country. In 1960, the Gibraltar Steamship Company installed a 50,000 watt radio transmitter on Great Swan, began blasting anti-Castro propaganda 350 miles away into Cuba. It is believed that the Gibraltar Steamship Company was, a front for the CIA. On November 22, 1971, the US and Honduras signed a treaty recognizing Honduran sovereignty over the Swan Islands, which had been claimed under the Guano Act of 1856. The treaty was effective September 1, 1972, and the islands were handed over to Honduran President Ramone Ernesto Cruz. It is believed in 1980, the CIA and other covert government agencies, used the islands as a secret training facility for Nicaraguan Contras. In 1989 Honduran president, Rafael Leonardo Callejas, proclaimed the islands a protected wildlife area. In 2001 it was annouced that Swan Island Development, LLC, would develop luxury resort hotels on the islands. In 2004, Swan Island Development, LLC announced it plans to launch a multimillion-dollar center to grow and study human embryonic stem cells on the islands. February 17th, 1848, and the acts supplementary to and amendatory thereof, and the following are hereby declared to be the objects and purposes for which this Corporation is formed and the terms thereof. First. -The corporate name of the association shall be " The Atlantic and Pacific Guano Company for supplying guano and other manures," and its duration shall be fifty years from the date thereof. Second. --The objects and purposes for which the Company is formed are to purchase and own islands and rocks, and other deposits of guano, and lands containing deposits of manures, and manures and such substances and materials as may be used in the manufacture and preparation of manures, and to supply guano and other manures, and to manufacture artificial manures, by a combination of such ingredients as may be best suited for that purpose, and with this view to purchase land and all necessary materials, and to employ competent persons to make all requisite experiments and tests, and to employ proper agents and own or charter and freight vessels for the importation of guano and other materials, and for the manufacture, transport and sale of guano and manures. Third.--The principal office of the said Company shall be in the city of New York, and its manufactures, store houses and agencies shall be in the said city and elsewhere as may be found most convenient for the transaction of its business. History from Encyberpedia and OldCompany.com (old stock certificate research service)