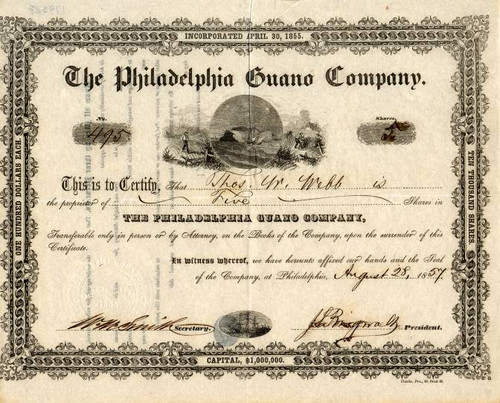 Beautifully engraved certificate from the Philadelphia Guano Company issued in 1857. This historic document has an ornate boarder and a vignette dipicting men working colecting guano and a ship at sea in front of an island. This item has the signatures of the Company's President and Secretary, and is over 157 years old.

Certificate Vignette
The Philadelphia Guano Company had been incorporated in April, 1855, by the Pennsylvania Legislature. The Philadelphia Guano Company was engaged with Venezuela to ship guano from Bird Island to send cargos to Europe, to the United States, and elsewhere. Guano (from the Quechua 'wanu', (dung) via Spanish) is the excrement (feces and urine) of seabirds, cave dwelling bats, and seals. Guano manure is an effective fertilizer due to its high levels of phosphorus and nitrogen and also its lack of odor. It was an important source of nitrates for gunpowder. Soil that is deficient in organic matter can be made more productive by addition of this manure. The word "guano" originates from the Quichua language of the Andes and means "the droppings of sea birds". Andean peoples collected guano from the coast of Peru for use as soil enricher. The rulers of the Inca Empire assigned great value to guano, restricting access to it and punishing any disturbance to the birds with death. Guano has been harvested over several centuries along the coast of Peru, where islands and rocky shores have been sheltered from humans and predators. The Guanay Cormorant has historically been the most important producer of guano; its guano is richer in nitrogen than guano from other seabirds. Other important guano producing species off the coast of Peru are the Peruvian Pelican and the Peruvian Booby. In November 1802, Alexander von Humboldt studied guano and its fertilizing properties at Callao in Peru, and his subsequent writings on this topic made the subject known in Europe. The high concentration of nitrates also made guano an important strategic commodity. The discovery during the 1840s of the use of guano as a fertilizer and its Chile saltpetre content as a key ingredient in explosives made the area strategically valuable. In this context the US passed the Guano Islands Act in 1856 giving citizens discovering a source of guano the right to take possession of unclaimed land and entitlement to exclusive rights to the deposits. However, the guano could only be removed for the use of citizens of the United States. This enabled US citizens to take possession of unoccupied islands containing guano. Control over guano played an important role in the Chincha Islands War (1864-1866) between Spain and a Peruvian-Chilean alliance since Spain occupied with its navy the Chincha Islands depriving Peru of lucrative income. In the second half of the 19th century guano extraction was eclipsed by salpeter in the form of caliche extraction from the interior of Atacama Desert, not far from the guano areas. After the War of the Pacific (1879-1883) Chile seized much of the guano as well as salpeter producing area making its national treasury grow by 900% between 1879 and 1902 due to taxes coming from the newly acquired lands. By the end of the 19th century, the importance of guano declined with the rise of artificial fertiliser, although guano is still used by organic gardeners and farmers. Superphosphate made from guano is used for aerial topdressing. History from Wikipedia and OldCompany.com (old stock certificate research service)