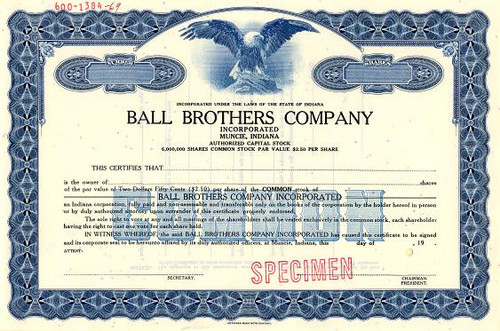 Beautiful engraved specimen certificate from the Ball Brothers Company dated in 1969. This historic document was printed by American Bank Note Company and has an ornate border around it with a vignette of an eagle. This item has the signatures of the Company's President and Secretary and is over 38 years old. 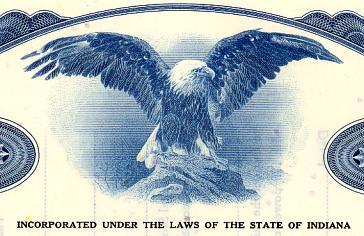 Certificate Vignette
Ball Corporation (earlier Ball Brothers Glass Manufacturing Co.) is an American company famous for producing glass canning jars, which it no longer makes. Founded in 1880, it is currently headquartered in Broomfield, Colorado. The company has expanded into avionics, space systems, metal beverage and food containers, aerosol containers and plastic containers. Company history In 1880, two Ball brothers, Frank and Edmund, borrowed $200 from their Uncle George, a minister, to go into business selling wood-jacketed tin containers to hold paint, varnishes and kerosene. This loan enabled them to purchase the Wooden Jacket Can Company and its patents from A.W. Aldrich. In 1884, three more brothers, George, Lucius and William, joined the company and it was renamed to Ball Brothers Glass Manufacturing Company and they started making their famous Home Canning Jar. In 1887, they moved their business to Muncie, Indiana, to take advantage of a natural gas boom in the Midwest as natural gas is a critical component in the making of glass jars. There they would stay until moving to Broomfield, Colorado, in 1998. After 92 years as a family-owned business, Ball went public on July 13, 1972, and its stock was traded over the counter. On December 17, 1973, the stock was admitted for trading on the New York Stock Exchange under the symbol BLL and began trading at $26 per share. Ball State University in Muncie, Indiana, is named after the Ball brothers who purchased buildings on the campus during the school's early years. Historic milestones In 1909, the first Ball Blue Book was printed featuring home canning recipes and techniques. In 1956, Ball formed Ball Brothers Research Corporation to produce goods and services for the aerospace sector. This was converted to a wholly owned subsidiary, Ball Aerospace & Technologies Corp., in 1995. In 1993, Ball spun off part of its glass business to Alltrista Co. In 1994, Ball began manufacturing PET plastic containers. In 1996, Ball spun off its glass container business to Ball-Foster Glass Container Co. and exited the glass business. In 2002, Ball acquired Schmalbach-Lubeca AG, the German-based metal beverage company, and created Ball Packaging Europe. In 2005, Ball celebrated their 125th anniversary. In 2006, Ball acquired US can, the largest US manufacturer of aerosol cans. About Specimens Specimen Certificates are actual certificates that have never been issued. They were usually kept by the printers in their permanent archives as their only example of a particular certificate. Sometimes you will see a hand stamp on the certificate that says "Do not remove from file". Specimens were also used to show prospective clients different types of certificate designs that were available. Specimen certificates are usually much scarcer than issued certificates. In fact, many times they are the only way to get a certificate for a particular company because the issued certificates were redeemed and destroyed. In a few instances, Specimen certificates we made for a company but were never used because a different design was chosen by the company. These certificates are normally stamped "Specimen" or they have small holes spelling the word specimen. Most of the time they don't have a serial number, or they have a serial number of 00000. This is an exciting sector of the hobby that grown in popularity over the past several years.