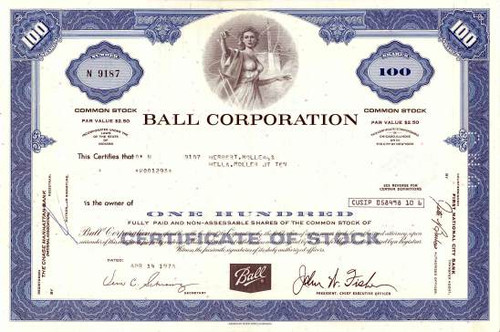 Beautifully engraved certificate from the Ball Corporation issued in 1978-1979. This historic document was printed by the American Banknote Company and has an ornate border around it with a vignette of an allegorical woman with a space shuttle in the background. This item has the printed signatures of the Company's President ( John W. Fisher ) and Secretary and is over 23 years old. 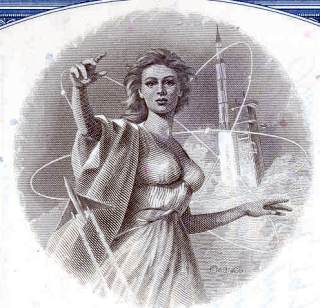 Certificate Vignette
Ball Corporation is one of the world's leading suppliers of metal and plastic packaging to the beverage and food industries. The company also owns Ball Aerospace & Technologies Corp. Ball, based in Broomfield, Colo., reported 2001 sales of $3.7 billion. Ball's packaging strategy is to manufacture, market, sell and service products that will meet the metal and plastic packaging needs of the beverage and food markets. In aerospace, Ball capitalizes on the world-class capabilities of its aerospace and technologies subsidiary. The five Ball brothers founded Ball in 1880. Our company is still probably best known by the public for its home canning jars, which we no longer make (see below). Here's some stuff about those jars, and highlights from our past. If you collect Ball jars, here are some questions and answers you may want to read. You can also download an Acrobat Reader file of our popular history poster which details the history of our company from 1880 to present. During its 100-plus years of existence, Ball Corporation has grown from a small producer of wooden-jacketed tin cans to an international manufacturing company. Ball is recognized around the world for its high-quality metal and PET plastic food and beverage containers, and for its leading aerospace technology products and services. The five founding Ball brothers started the company in 1880 in Buffalo, New York. Two of the brothers, Frank and Edmund, borrowed $200 from their Uncle George, a minister, to go into business selling wood-jacketed tin containers to hold paint, varnishes and kerosene. They named their business the Wooden Jacket Can Company. Their product was so successful they expanded their line. Soon, the brothers had refined their original product to tin-jacketed, glass-lined containers. In 1884, the renamed Ball Brothers Glass Manufacturing Company began manufacturing yet another new product - the home canning jar, which would one day make Ball a household name. In 1887, the five Ball brothers - Edmund, Frank, George, Lucius and William - moved their business to Muncie, Indiana to take advantage of a natural gas boom in the Midwest. Great quantities of natural gas were necessary to make glass. Ball acquired the first of several small glass companies in 1898, and printed the first Ball Blue Book - featuring home canning recipes and techniques - in 1909. Other highlights include: The acquisition of the metal beverage container assets of Reynolds Metals Company in 1998. The acquisition made Ball the largest supplier of metal beverage cans in North America, and one of the larger in the world. The acquisition of M.C. Packaging (Hong Kong) Ltd. in China. MCP, combined with Ball's FTB Packaging Ltd. joint venture in China, makes Ball the largest supplier of cans in that nation. The creation and sale of Ball-Foster Glass Container Co., a joint venture glass company with Group Saint Gobain, in September 1995. Ball sold its remaining interest in Ball-Foster to Group Saint Gobain in 1996, and exited the glass business. The transition of Ball's aerospace business and its conversion to a wholly owned subsidiary in July 1995. Ball Aerospace & Technologies Corp. is based in Broomfield, Colorado. The establishment of Ball's plastic container operations in 1994. It makes PET plastic containers and is based near Atlanta, Ga. The acquisition of Heekin Can, Inc. in March 1993. Heekin was the largest regional manufacturer of metal food containers in the U.S. prior to the acquisition. Combined with Ball Packaging Products Canada, Inc.'s six plants, the eleven former Heekin plants made Ball the third largest producer of metal food and aerosol cans in the North American market. The spin-off of Alltrista Corporation in March 1993. Ball reorganized and spun-off seven former divisions to form Alltrista Corporation. Alltrista, which was comprised of consumer products (which markets the famous Ball canning supplies), metal services, zinc products, Unimark plastics, industrial plastics, plastic packaging and the LumenX company, began trading on the NASDAQ exchange in April under the symbol "JARS." Alltrista is a separate, independent company. The 1969 acquisition of Jeffco Manufacturing Company in Denver and subsequent metal beverage container operations formation. The company now has nine North American metal beverage container plants and produces 17 billion beverage cans and easy-open can ends. John W. Fisher is currently an honorary director and retired chairman, president and chief executive officer of Ball Corporation, presently serving as chairman emeritus of the board of directors. Mr. Fisher joined the company in 1941 as a trainee. Following nine years in various manufacturing assignments he was named vice president of manufacturing, and in 1954 became vice president of sales. Mr. Fisher was elected a corporate vice president in 1963, and was named president and CEO in 1970. He was elected chairman and CEO in 1978. Mr. Fisher retired as CEO in 1981 and as chairman of the board in 1986. He had served as a director of Ball Corporation since 1943. Background information is from the company's marketing materials.