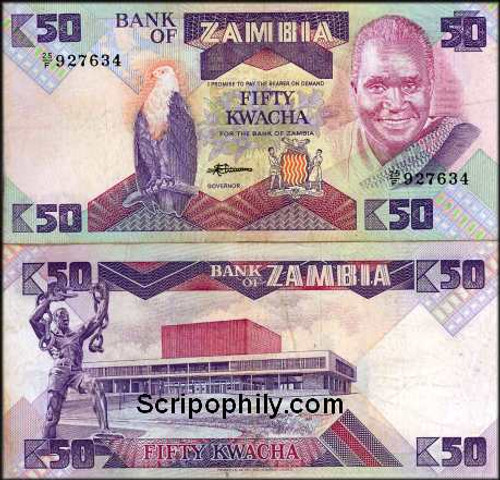 This package includes 25 of the Fifty Kwacha Notes as shown in the scan ( front and back ). This currency was used from 1986-1988. It has a color vignette of Kenneth Kaunda. The one-time schoolteacher led Zambia for 27 years. He, along with Nyerere, Mandela, and Mugabe, defined African independence. And theirs is a mixed record to be sure. But in 1991, Kaunda stepped aside, making way for a democratically-elected leader, and he now spends his days advocating for AIDS awareness, visiting world leaders. Zambian Kwacha The Kwacha (ZMK) is the current legal tender of the Republic of Zambia.The Zambian Kwacha (K) is divided into 100 Ngwee. Prior to independence, notes and coin in denominations of £10, £5, 10s and 5s, 2s-6d, 2s, 1s, 6d, 3d, and 2d circulated in the country as legal tender. After independence, the Bank issued the first Zambian notes and coin in similar denominations, although different in design. In order to allow for a smooth changeover, the two currencies circulated alongside each other until December 15, 1965, when the old currencies were withdrawn from circulation for subsequent demonetization, except for the 3d coin which continued to circulate, for a brief period. Together with the Zambian £. s. d. currency, a 5s proof coin to commemorate independence was issued. It was later followed by an ordinary 5s coin for circulation purposes. The New Kwacha In 1967, the Government decided in favour of decimalisation and designated the main unit as Kwacha comprising of 100 ngwee. The Kwacha was equivalent to the old ten shillings. The Currency Act, 1967 replaced the Zambian £. s. d. currency for new Kwacha notes, and ngwee coin. Thus on January 16, 1968, the Zambian Pound was replaced by the Kwacha with the new Official Rate equal to one half the old unit, or US$1.40. The £5 note became K10, the £1 note K2, then ten shilling note one Kwacha note and a new 50 ngwee note was introduced to correspond to the old 5 shillings, 2 shilling coin became 20 ngwee, one shilling coin became 10 ngwee and 6 pence became 5 ngwee. At the same time, the currency was decimalized. Following the de facto devaluation of the U.S. Dollar on August 15, 1971, the Kwacha, through its link to the Pound Sterling fixed at K1.7094= £1.00, began to appreciate vis-a-vis the American unit, beginning August 23rd. On December 3rd, Zambia broke her currency's ties to the British unit and attached the Kwacha to the U.S. Dollar, thereby reestablishing the Official Rate of US$ 1.40, a de facto devaluation. In the wake of the U.S. Dollar devaluation on December 18th, the Kwacha's gold content was reduced 7.89% on December 22nd, thus paralleling the American unit's devaluation and leaving the Official Rate unchanged. A 4.5% fluctuation range for the Kwacha was also introduced. With the dismantling of the Sterling Area on June 23, 1972, along with the floating of the Pound Sterling, Zambia relinquished the monetary privileges she had enjoyed as a member of the Area. Following the U.S. Dollar devaluation in February 1973, the Official Rate of the Zambian currency was realigned to US$1.555, effective February 15th, based on the Kwacha's unchanged gold content. There are no minimum reserve requirements of gold and foreign exchange for the nation's currency. Again, a change-over period was allowed to complete the withdrawal of Zambian £. s. d. notes and coin from circulation and these ceased to be legal tender on January 31, 1974. F.A.O. numismatic collection In commemoration of the Food and Agricultural Organisation Day (F.A.O.), the Bank also issued a 50 ngwee F.A.O. proof coin for numismatic collection. Later as the need arose to bridge the gap between 20 ngwee and the K1 note, an ordinary 50 ngwee F.A.O. coin and 50 ngwee coin of new design were simultaneously put into circulation towards the middle of 1971. A K20 note was also introduced during the same period. Second Republic With the advent of the One Party Participatory Democracy, the Bank issued a commemorative K1 note to join the rest of the nation in celebrating the birth of the Second Republic on December 13, 1973. Finally, the bank changed the colour of the 50 ngwee note in order to eliminate the confusion that appeared to exist between the 50 ngwee and the new K5 notes, hence the multi-coloured 50 ngwee note made its first appearance in April 1974.