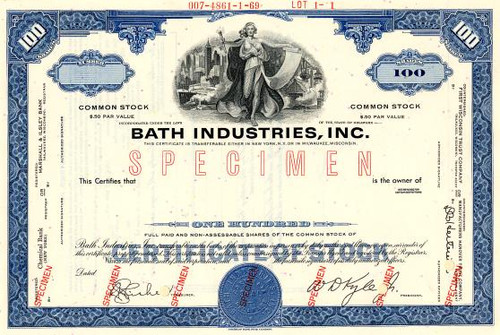 Beautiful engraved specimen certificate from the Bath Industries dated in 1969 to 1971. This historic document was printed by American Bank Note Company and has an ornate border around it with a vignette of an allegorical woman. This item has the printed signatures of the Company's President and Secretary and is over 36 years old. 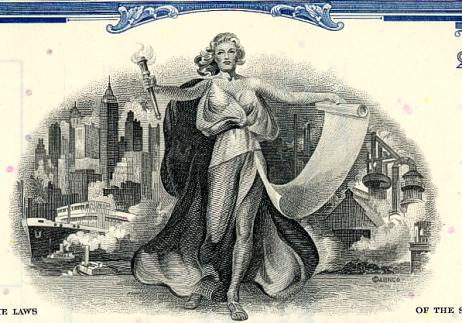 Certificate Vignette
Bath Iron Works (BIW) is located on the Kennebec River in Bath, Maine. Since it was founded in 1884 by Thomas W. Hyde, BIW has built private, commercial, and military vessels. Its biggest customer has been the U.S. Navy, for which BIW has built (and often designed) a battleship, frigates, cruisers, and destroyers, including the Arleigh Burke-class destroyer--the most advanced surface warship in the world. BIW was purchased in 1995 by General Dynamics. BIW has since at least the 1970s been the largest private employer in the state of Maine, though that title may recently have slipped to the Hannaford grocery chain. In World War II, the toughness of warships launched by Maine workers gave rise to the saying: "Bath-built is best-built". In 1988, the USS Samuel B. Roberts (FFG-58), commissioned two years earlier at Bath, survived a mine explosion that tore a hole in its engine room and flooded two compartments. Time Line 1826 Bath Iron Foundry is founded on the Kennebec River, Maine 1865 General Thomas Worcester Hyde, a civil war hero, purchases Bath Iron Foundry 1882 Goss Marine Iron Works is founded nearby 1884 General Hyde renames Bath Iron Foundry as Bath Iron Works and incorporates company 1888 New England Shipbuilding Company, with General Hyde as an investor, acquires Goss Marine Iron Works 1888 BIW acquires New England Shipbuilding Company 1890 Steamer "Cottage City" is the first BIW-built hull 1893 USS Machias, a gunboat, is the first BIW-built U.S. Navy ship 1894 "City Of Lowell" is the first BIW-built commercial steel vessel 1901 BIW is acquired by United States Shipbuilding Trust 1905 John S. Hyde, eldest son of General Hyde, purchases BIW 1906 USS Georgia, the first and only BIW-built battleship, is delivered 1917 BIW is sold to a syndicate of Maine investors upon the death of John Hyde 1925 BIW is sold at a public auction, operations are idled 1927 BIW is leased by William S. "Pete" Newell and a group of investors, company is incorporated again 1940 Second BIW facility, the Hardings plant, is built in East Brunswick, ME 1940-1945 82 destroyers are built during WWII, totaling more than the entire Japanese Empire 1955 First of a new class of Navy destroyers, USS Forest Sherman, is delivered 1967 Bath Industries, Inc. is established as a holding company for BIW, Pennsylvania Crusher and the Hyde Windlass Co. 1968 Bath Industries, Inc. acquires Congoleum-Nairn, a manufacturer of home furnishings 1975 Bath Industries, Inc. changes its name to Congoleum Corporation 1977 Lead ship of a new Navy class of guided missile frigates, USS Oliver Hazard Perry, is delivered 1983 Floating dry dock is opened in Portland, ME 1984 Tanker "Falcon Champion," is the last BIW-built commercial ship delivered 1986 BIW is acquired by Prudential Insurance 1987 Last Oliver Hazard Perry class ship, USS Kauffman, is delivered 1987 First BIW-built, guided missile "AEGIS" cruiser, USS Thomas Gates, is delivered 1991 The lead ship of a new Navy class of guided missile "AEGIS" destroyers, USS Arleigh Burke, is delivered 1993 Last BIW-built AEGIS cruiser, USS Lake Erie, is delivered 1995 Bath Iron Works becomes a wholly-owned subsidiary of General Dynamics 1996 Awarded contract under an Avondale Shipyard-led alliance to build four of the Navy's new dock landing ships, the San Antonio-class (LPD 17) 1998 Groundbreaking for Land Level Transfer Facility. 2001 BIW hosts dedication ceremony for Land Level Transfer Facility (LLTF) and the Manufacturing Support Center (MSC) 2001 BIW Launches MASON (DDG 87). Last ship to slide down incline ways 2002 Realignment of DDG 51 and LPD 17 construction contracts. 2002 BIW Christens CHAFEE (DDG 90) First ship on Land Level Transfer Facility 2003 BIW subcontract for DD(X) Phase III program History from Wikipedia and OldCompanyResearch.com. About Specimens Specimen Certificates are actual certificates that have never been issued. They were usually kept by the printers in their permanent archives as their only example of a particular certificate. Sometimes you will see a hand stamp on the certificate that says "Do not remove from file". Specimens were also used to show prospective clients different types of certificate designs that were available. Specimen certificates are usually much scarcer than issued certificates. In fact, many times they are the only way to get a certificate for a particular company because the issued certificates were redeemed and destroyed. In a few instances, Specimen certificates we made for a company but were never used because a different design was chosen by the company. These certificates are normally stamped "Specimen" or they have small holes spelling the word specimen. Most of the time they don't have a serial number, or they have a serial number of 00000. This is an exciting sector of the hobby that grown in popularity over the past several years.