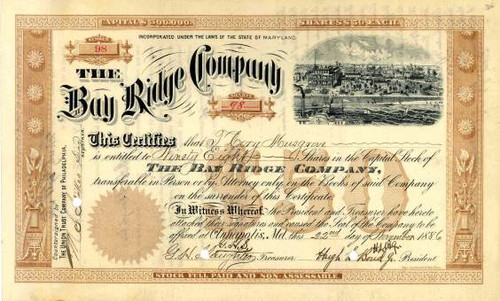 Beautifully engraved certificate from the Bay Ridge Company issued in 1887. This historic document has an ornate border around it with a vignette of a city by the bay. This item is hand signed by the Company's President and Treasurer and is over 128 years old. 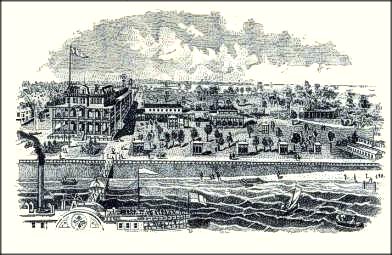 Certificate Vignette
The Bay Ridge Company built the Annapolis and Bay Ridge Railroad and rebuild the beach resort on the Chesapeake Bay. The hotel 1885 was doubled in size in 1885, the boardwalk expanded, and beach cottages were constructed. The Company even opened a zoological exhibit with lions, tigers and bears, oh my. In September 1886, the Bay Ridge Company issued $300,000.00 worth of bonds. Robert Gerrett, President of the Baltimore and Ohio, bought $150,000.00 worth of the bonds and the Baltimore and Ohio Railroad had a controlling interest in the Bay Ridge Company and the Annapolis and Bay Ridge Railroad. Annapolis was founded in 1649. It is the home of the United States Naval Academy founded in 1845 and also the home of St. John's College, founded in 1696 as King William's School and the third oldest institution of higher learning in the United States.