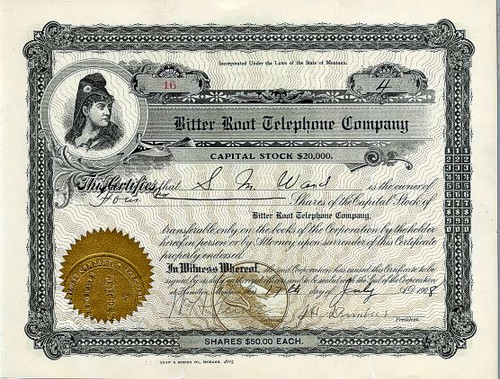 Beautiful certificate from the Bitter Root Telephone Company issued in 1908. This historic document was printed by the Shaw & Borden Company and has an ornate border around it with a vignette of an allegorical woman. This item has the signatures of the Company's President, A. H. Danders and Secretary, W. H. Pence and is over 101 years old. 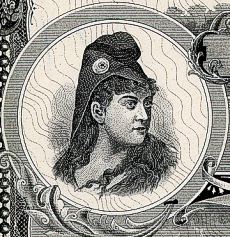 Certificate Vignette
Reported in the American Telephone Journal - 1902 HAMILTON, MONT.--The Bitter Root Telephone Company has been incorporated by Matt Blindauer, Henry L. Meyers and Fred T. Lillick, all of Hamilton, with a capital stock of $20,000. HAMILTON, MONT.--The Bitter Root Telephone Company, recently organized, has filed a petition with the board of county commissioners asking for a 50-year franchise. The route of the proposed line as given in the petition is south through Grantsdale, Como and Darby, up the Bitter Root Valley and up the west fork of the Bitter Root River to the south fork of the west fork, and thence up the south fork to Hughes creek; thence up Hughes creek to the south fork of that creek, and thence up the south fork to the State line between Montana and Idaho, and by a certain described route in Idaho to a point in Lemhi county, Idaho. There will be a branch l1ne running from the south fork of Hughes creek up Hughes creek to the head of said creek. The organizers propose to have the poles for the line cut and hauled during the winter, so that as soon as the weather permits in the spring the work of construction may begin.