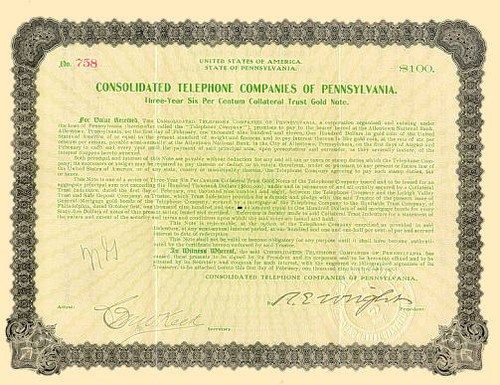 Beautiful Gold Note Certificate from the Consolidated Telephone Companies of Pennsylvania issued in 1908. This historic document has an ornate border around it. This item is hand signed by the company's president and secretary and is over 107 years old. The Schuylkill Valley Telephone and Telegraph Company, incorporated Feb. II, 1901, changed its name July 22, 1901, to the Consolidated Telephone Companies of Pennsylvania. On its original capital stock of $1,000 it paid the bonus. Subsequently it increased said capital to $4,000,000 and proceeded under the act of 1901 to acquire the capital stock of the People's Telephone Co., Lackawanna Telephone Co., Anthracite Telephone Co., Slate Belt Telephone Co. and the Danielsville Telephone Co., whose aggregate capital stock was $1,168,000, upon which the bonus had been fully paid. Held, that the commonwealth was not entitled to collect a bonus a second time on the said capital which had been acquired by said purchase. The provision in the case of merger is not an affirmative exemption, but rather a provision to secure to the commonwealth the bonus on so much of the capital stock of the new corporation created by the merger as had not already paid the bonus.