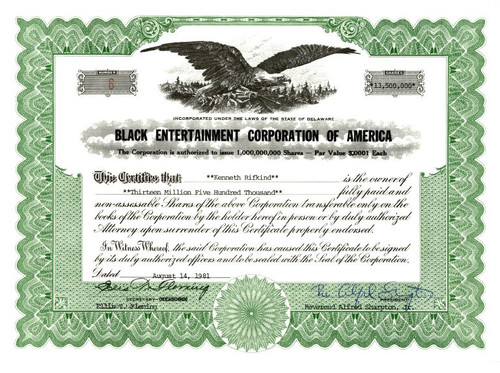 Beautiful stock certificate from the Black Entertainment Corporation of America issued in 1981. This historic document has an ornate border around it with a vignette of an eagle. This item has the signatures of the Company's President, Alford Sharpton Jr. and Secretary, Ellis T. Fleming. The certificate was issued to Kenneth Rifkind for 13,500,000 shares. 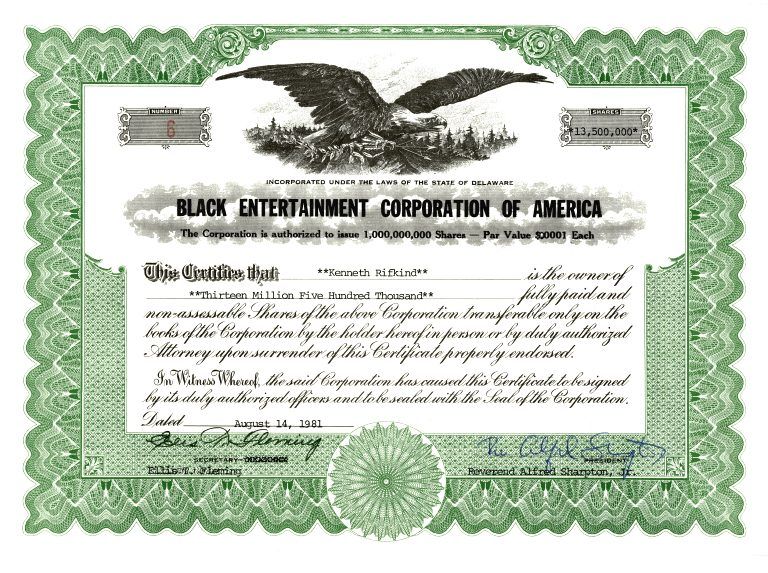 Certificate Vignette
The Black Entertainment Corporation of America was incorporated in the state of Delaware on 8/13/1981. Corporate file number 920312. Alfred Charles Sharpton Jr. (born October 3, 1954) is an American civil rights activist, Baptist minister, television/radio talk show host and a former White House adviser for President Barack Obama. In 2004, he was a candidate for the Democratic nomination for the U.S. presidential election. He hosts his own radio talk show, Keepin' It Real, and he makes regular guest appearances cable news television. In 2011, he was named the host of MSNBC's PoliticsNation, a nightly talk show. In 2015, the program was shifted to Sunday mornings. Dorothy Edwards Brunson (March 13, 1939 July 31, 2011) was a notable African-American broadcaster. Between 1973 and 1979, Brunson was an executive with Inner City Broadcasting Corporation, which owned WLIB and WBLS in New York City. After leaving Inner City Broadcasting, Brunson was the first African-American female to own a radio station, WEBB (1360 AM) in Baltimore, Maryland, purchased from entertainer James Brown in 1979. She also later purchased radio stations in Atlanta and Wilmington, North Carolina. Brunson would sell off her radio stations eleven years later in 1990 to provide funding to establish WGTW-TV (Channel 48), licensed to Burlington, New Jersey, a suburb of Philadelphia, to the east across the Delaware River, becoming the first African-American woman to establish a television station. She later sold WGTW-TV to the Trinity Broadcasting Network in 2004. History from Wikipedia and OldCompany.com (old stock certificate research service)